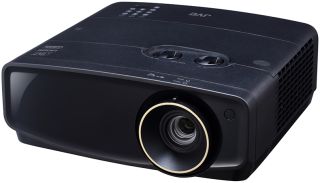 JVC has whipped the covers off a new 4K HDR DLP projector: the LX-UH1.

The spec-sheet is comprehensive. 3840 x 2160 4K Ultra HD resolution, 2000 lumens of brightness, HDR10 and HLG support, a pair of HDMI inputs (one of which features full speed/full spec HDCP2.2 compliance) and a dynamic contrast ratio claimed to be 100,000:1 are particularly enticing.

Elsewhere, JVC is making much of the LX-UH1's versatility as it relates to installation. It features a +/- 60% vertical and +/- 23% horizontal lens shift which, in combination with 1.6x wide-zoom lens, should make it fairly straightforward to install in all but the most trying environments.

The LX-UH1 is available in UK from next month. It's expected to sell for around £2500 and will be available in black or white.