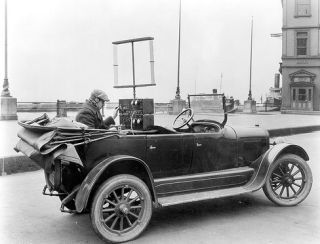 Bluetooth? DAB? USB? In your car? Could be standard, should be standard – but it could add a few hundred pounds to the invoice, or could cost you £2000+...

If you have a phone and you want to stay within the law while driving, want to know where you are or would like to run your favourite tunes through your in-car entertainment system, you have two choices.

One is mass of holders hanging off ventilation grilles or windscreen suction cups, leads everywhere and finding a way to plug in all those fag-lighter power plugs; or specifying the right kit on your next car to do it all for you.

But as our colleagues at What Car? have discovered, your choice of ride can lead to you spending £2000 or more to get facilities such as navigation, a USB hook-up for your music, and Bluetooth to let you answer the phone on the road without risking a fine of up to £1000 and three points on your licence.

And amazingly, it's not basic models that charge you the most for the privilege of having all this tech integrated: buy a £20,000 Mercedes A180SE, and you can expect to pay an extra £2300 if you tick the box for the six-disc CD changer, a 7in display bolted on the dash, and HDD navigation with 10GB of storage.

Think simpler and go for the company's Drive Kit Plus, which interfaces with your smartphone to let you access internet radio, social media apps and the like, and you'll pay £548, and pay for two hours' dealer labour to fit it. Oh, and you'll need the upgraded Audio 20 system, at £390, or you won't have a screen on which the Drive Kit Plus can work.

Even buyers spending over £37,000 on a Porsche Boxster will be asked for £2141 for a similar system, while buyers spending just over £100k on a of the top-of-the-line Cayenne Turbo S (above) will also find their invoice growing should they want to add their smartphone and music, let alone DAB, to their new pride and joy.

Kitting up a Mini Cooper 1.6 with navigation, a USB input and smartphone integration will add almost 10% to the £14,900 sticker price, although you could have just Bluetooth and USB for £295.

And if you look a little further up the BMW line-up to the £17,990 114iSE, the infotainment package adds a fiver under £2000. And that doesn't even get you DAB – another £295 to you, sir – even though it makes little sense to be selling new cars without DAB these days…

As What Car? says, it's possible to add all this to some vehicles for as little as £300 with a system such as VW's excellent Maps and More (above), available on the magazine's 2012 Car of the Year, the VW Up!, which starts from just over £8000.

I've played with the VW system in one of the family cars, and it really is superbly integrated: the removable screen sits on a factory fitted stalk above the dashboard, and offers touch-screen navigation and media, complete with Bluetooth, European maps and voice control.

But this slick little system isn't available on the latest Golf, although that car does get DAB, Bluetooth and SD card reader, controlled by a touchscreen. If you want to add built-in navigation, you have to step up from the base Golf S, at £16,285, to the SE model at just shy of £19,000. Then you're allowed to spend another £735 to add the company's basic Discover Navigation System, or £1690 for the flagship Discover Pro version.

What Car?'s view is that it would cost very little to integrate Bluetooth and USB input at the design and production stages, and that new cars should come with these features as standard, and probably DAB, too.

It highlights its top five standard infotainment systems, starting with the Hyundai i40 Tourer 1.6GDi Style – and you thought hi-fi had unwieldy model designations –, which it reckons you should be able to buy for just under £19k complete with touchscreen navigation, USB and Bluetooth, while the Mazda 3 1.6 Venture, at £17,495, has Bluetooth, voice recognition, USB, aux-in, and a 7in touchscreen Media Centre as standard.

And not all upmarket models ask you to pay through the nose for the infotainment extras: the Jaguar XF SE Business has Bluetooth, DAB radio, USB, and 7in touch-screen HDD navigation as standard for £31,490, while a Toyota Avensis Tourer 1.8TR comes with navigation, Bluetooth and USB for a price What Car? reckons you should be able to haggle down to not much over £20k.

Neither do all models whose infotainment is on the options list attempt to bleed you dry: USB, Bluetooth, media playback and a 7in screen can be had for an extra £275 on the Vauxhall Adam (above), selling for around £11,000, while buyers of the Fiat 500 1.2 Pop (below) can add Bluetooth. voice recognition and USB for £270, bringing the cost of the car in just under £10,000.

So, there's something else to consider alongside the fuel economy, VED bands and servicing costs as you dream of that new '13' plate car…