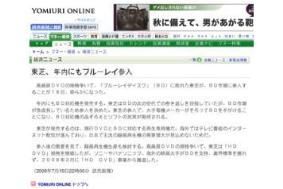 Toshiba famously championed the HD DVD format in the 'format war' with Blu-ray Disc, and since abandoning HD DVD in the Spring of 2008 has resisted a BD launch, preferring instead to develop upscaling DVD players.

The Yomiuri Shimbun's sources say it has actually been working on a next-generation technology designed to supercede Blu-ray Disc. However, it's said that policy has now been abandoned as the BD market was getting too big to ignore.

The move would seem to be in line with the comments of the comments of company chairman Atsutoshi Nishida, made at a shareholder's meeting last month. Nishida, at the time president of the company, said of a Blu-ray launch "It's not that we won't do it because we've lost. We'll deal with the issue flexibly."

One consideration behind the decision may be the desire of consumers to buy one-brand solutions, the newspaper suggests, saying that "The Blu-ray market has entered a full-fledged expansion phase, as consumers buy Blu-ray recorders together with new flat-screen TVs capable of receiving digital terrestrial broadcasting [in Japan] ahead of the signal's switchover from analogue in July 2011.

"If Toshiba stayed out of the Blu-ray business, the sales of its flat-screen TVs – the core of its audiovisual division – could be negatively affected."