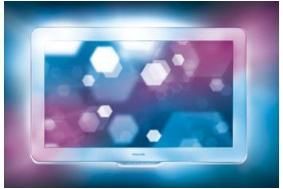 Perhaps most exciting is the 3rd generation of Aurea, announced in the form of the 40PFL9904H. This 40in set has a full glass front and Ambilight Active Frame, which basically means the bezel itself lights up to match the action on screen.

Philips has been working on making this tech more compact, so the 40PFL9904H has a thinner bezel and is just 59mm deep – significantly down on the last generation's 12cm depth.

LED side-lighting is also a feature of the new 40PFL8664H. Despite being an Ambilight Spectra set, Philips has managed to keep this 40incher very compact, with just a 28mm bezel and 39mm depth.

Onboard you get Pixel Precise HD technology, 100Hz motion processing, Net TV via the ethernet connection, and four HDMI inputs.

Philips is also keen to remind us of the 42PFL9704H and 46PFL9704H that we first saw in Lisbon earlier in the year. These flagship models boast direct backlighting from 224 independently-controlled LED segments, which Philips calls LED Pro and results in a claimed contrast ratio of 5,000,000:1.

Ambilight Spectra 3, 200Hz Clear LCD motion processing, and Net TV via integrated wi-fi is all included. Importantly, these sets are due in the UK in a month or so, and we've been promised review samples as soon as they're available.