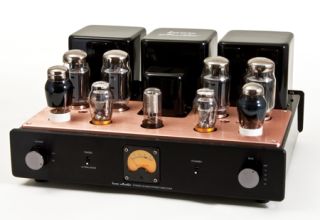 Icon Audio's new Stereo 60P MkIIIm is the company's first stereo power amplifier and represents valve power in its purest form, with no input selection, no volume control, and an input socket that connects directly to the grid of the first valve.

As some users may prefer triode operation, the power amp can switch from an ultralinear 80W-per-channel amplifier to a 40W triode amp at the flick of a switch.

In addition, the LDT transformers have been optimised for both settings, ensuring that the highest quality sound is achieved at all times, the company claims.

The Stereo 60P MkIIIm also comes with a built-in bias meter, intended to keep the amplifier running at peak performance.