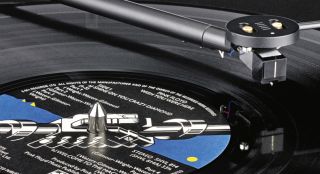 Günther Loibl, founder and CEO of Austrian start-up Rebeat Innovation, told Pitchfork his company has received $4.8m (£3.4m) to develop the patent it filed in 2016. The patent describes a method of manufacturing vinyl records with greater fidelity, greater amplitude and longer playing times than conventional LPs.

$600k of the capital has already gone on a laser assembly to create 'stampers' (which create the grooves in vinyl discs) made from 3D topographic maps of digital audio files. This method, in theory at least, means records can be manufactured with greater precision and less loss of information - and without using many of the chemicals the traditional process involves.

The result ought to be a record with as much as 30 per cent more playing time, 30 per cent greater signal strength and greater fidelity than is currently usual. All from a disc that's compatible with existing turntable set-ups.

Loibl intends to present some test stampers at Detroit's Making Vinyl conference in October this year. "It will take another eight months to do all the fine adjustments. So by summer 2019 we shall see the first HD vinyl in stores."

We find we're rather impatient all of a sudden.