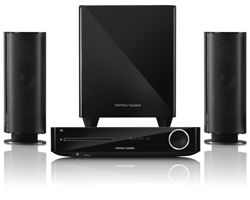 There's a mix of 2.1 and 5.1 systems in the stylish line-up, each with a range of features including 3D Blu-ray playback, wireless streaming and smartphone remote control.

Harman's own Truestream Bluetooth functionality is across all five systems, and aims to deliver high quality wireless music playback as well as the ability to connect up to eight Bluetooth-equipped devices at a time.

The BDS systems can also be controlled from any iOS or Android device using a free remote control app.

The range starts with the BDS 375, which has the 2.1 channel BDS 275 main unit and the HKTS 2mkII speakers.

The step-up BDS 775 offers the same features but has a 5.1 speaker system thanks to the BDS 575 head unit and the HKTS 9 speakers.

The next three models features built-in Wi-Fi and Apple AirPlay streaming. The BDS 477, pictured, has the 2.1 channel BDS 277 as its centerpiece, with the HKTS 200 speakers completing the package.

Again you can choose a 5.1 variant in the shape of the flagship BDS 877, which has the BDS 577 at its heart alongside the HKTS 65 speaker package complete with wireless subwoofer.

Last but not least is the all-white BDS 7773W, which features a white version of the BDS 577 and comes with matching white HKTS 30W speakers.

BDS 375: available from September for a suggested retail price of €1,149

BDS 775: available from September for a suggested retail price of €1,249

BDS 477: available from October for a suggested retail price of €1,349

BDS 877: available from October for a suggested retail price of €1,749

We will bring you confirmed UK prices just as soon as we get them.