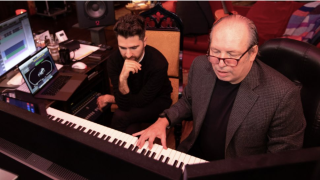 Hans Zimmer's latest project stars you as the hero – that is, if you're sat behind the wheel of BMW's latest electric car.

With an internal combustion engine no longer taking the sonic heavy lifting, electric cars need to announce their presence on the road somehow. And, as the number of electric cars on our roads are only on the rise and rise, it seems there's a good job for discerning composers going there...

Unveiled yesterday at BMW's NextGen event in Munich, the concept BMW Vision M Next became the first car to feature IconicSounds Electric, which – as seen by our friends over at MusicRadar – Hans Zimmer helped to create. IconicSounds Electric will also be used in future electric BMW vehicles, so we can expect plenty of sequels.

Zimmer worked on the project with Renzo Vitale, sound designer and acoustic engineer at BMW Group.

"I have always been a BMW enthusiast," said Zimmer, recalling the times he'd recognise the sound of his mum coming home by the roar of her BMW when he was a child.

Explaining how the sound changes the experience of driving, he said: "When the driver interacts with the accelerator pedal it is not only a mechanical touchpoint but also a performative element... the driver moves through a series of gradually morphing sound textures."

In the case of the Vision M Next, the autonomous automobile's sound is designed to "create harmony between the driver and the electrically driven vehicle," according to BMW.

We suppose it'd be too much to hope for Zimmer triumphs like The Lion King, Gladiator, Inception or the theme tune to the game-show Going for Gold as optional acceleration upgrades?