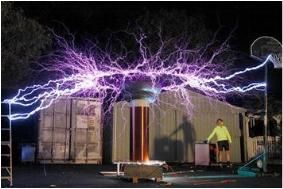 Nearly three quarters of those polled said electricity is our all-time greatest discovery, with 55% voting for the wheel, followed by 53% for the internet and 48% for the telephone.

Half of those quizzed said electricity was the thing they'd miss most if it disappeared, compared to 14% who said they'd want to save the internet and 6% who'd like to keep their loo.

As for things we'd apparently be quite happy to do without, they include irons, condoms and zips. Make of that what you will.

More worryingly, one in three of us apparently can't change a household plug, and the younger you are, the less handy you're likely to be.

Unless you're a Geordie, that is: Geordies are Britain's most handy householders, with more people there being able to change a plug than anywhere else.

Steve Bratt, CEO of the ECA, says: "In hundreds of years we have seen inventions and discoveries of every type and we've all got our favourites, but we still look to electricity to power so much of what we need such as computers, TVs and household appliances."