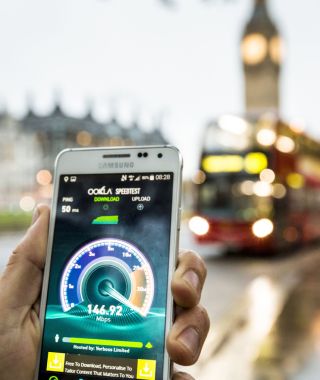 The operator says 4G+ – also known as LTE-Advanced – is the "next step in 4G technology" and will be extended to cover the entire Greater London area and the UK's busiest cities during 2015.

EE's 2.6GHz high capacity spectrum is being used to support the 4G+ network, which will deliver faster download speeds – a handy feature if mobile music and/or video streaming is your thing, not least with the rise in CD-quality streaming music services such as Tidal and Qobuz.

Birmingham, Manchester and Liverpool are also in line to benefit from the 4G+ next year. EE has said, however, it only offers two compatible devices – the Samsung Alpha and Samsung Galaxy Note 4.

EE CEO, Olaf Swantee, said: "We’ve invested in innovation, driven competition and given people in London a mobile network that’s faster than almost any other in the world.

"We’ll keep investing to make sure that all our customers can get access to the great mobile technology that can make a real difference to the way they live their digital lives."

In addition to launching 4G+, EE has also confirmed that "standard" 4G mobile broadband is now available in 300 towns and cities after 19 more locations were added to the operator's network.

Banbury, Blaydon, Greenock, Limavady, Penicuik, Warwick and Ystrad Mynach can now access 4G from EE, with the network now reported to cover more than 75 per cent of the UK population.

And Double Speed 4G is also being expanded across the UK by EE, with the network delivering speeds of up to 60Mbps in 20 places at the moment.