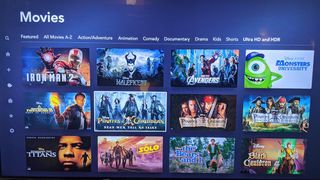 Disney Plus (Disney+) will launch in several European countries tomorrow with at least 25 per cent less bandwidth and, thus, a probable reduction in picture quality.

The House of Mouse video streaming service is the latest to commit to bandwidth reduction in order to to ease pressure on internet service providers during the coronavirus pandemic.

Last week, EU commissioner Thierry Bretton called for video streaming services to switch to SD video streams to save networks from collapse. Netflix quickly complied, promising to reduce bitrates across all our streams in Europe for 30 days – and BBC iPlayer, YouTube, Apple+, Amazon Prime Video and now Disney+ have since followed suit.

In a statement, Disney said: “In line with Disney’s longstanding commitment to act responsibly, we are responding to the request of European Commissioner for Internal Market Thierry Breton to work together to ensure the smooth functioning of the broadband infrastructure.

“In anticipation of high consumer demand for Disney+, we are proactively instituting measures to lower our overall bandwidth utilisation by at least 25 per cent in all of the markets launching Disney+ on March 24.

“In the coming days, we will be monitoring Internet congestion and working closely with Internet service providers to further reduce bitrates as necessary to ensure they are not overwhelmed by consumer demand. We look forward to the launch of Disney+ and hope it will provide a much-needed respite for families in these challenging and trying times.”

So are those juicy 4K streams in jeopardy? This bandwidth reduction will mean lower picture quality and a probable squeeze on the catalogue's vast 4K streams – especially if subscription uptake and initial usage is high. Still, even if we have to wait patiently for full-fat 4K streams in all their glory, the service should have plenty of content (and enough quality) to whet the appetite of those looking for their next movie and TV series fix.

Disney+ is set to launch in the UK, Ireland, Germany, Spain, Italy, Switzerland and Austria tomorrow (its launch in France has been reportedly delayed until 7th April), and if you sign-up before midnight you can take advantage of an excellent Disney Plus deal.

Disney Plus: everything you need to know