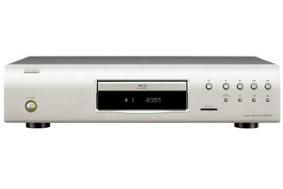 The DBP-2010 is Profile 2.0 enabled, has full decoding of Dolby TrueHD and DTS-HD Master Audio onboard, comes with 7.1 channel analogue outputs and has a dedicated stereo analogue output equipped with Burr Brown 192kHz/24-bit audio DACs.

On the video side, the DBP-2010 comes with Anchor Bay Technologies VRS (Video Reference Series) processing via HDMI 1.3a, upconversion and scaling to 1080p/24fps, as well as 3D digital noise reduction.

Other features include BD-Live and Bonus View functionality, an Ethernet port for internet connectivity and DiVX HD and AVCHD playback of recordings made on HD camcorders.

The Denon DBP-2010 is available this month in silver and black. More new Denon Blu-ray players are in the pipeline, as outlined below:

A possible universal-player successor to the DVD-3800BD is in development – but no news on when/if it will be coming to the UK.

Denon DVD-2500BT – the superb BD transport carries on until the end of this year. No news yet of any successor transport.

Denon DVD-A1UD - the flagship universal BD player carries on and is not due for replacement.

We've put in our pitch for review samples, and should hopefully bring you the first tests of full production models of these players from late-July onwards...