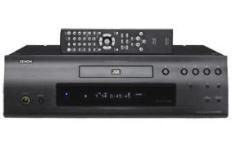 We were impressed when this player was first tested and the Denon is still a good option. It just suffers against the new decks on the block

We originally reviewed the Denon DVD-3800BD well before many other Blu-ray players came onto the scene. So, it is interesting to see how it handles the pressure of the newer players.

The machine boasts typical Denon robustness in the form of a multi-layer heavy-duty chassis.

Audio and picture processing
All the high-definition audio formats are catered for, whether you want to bitstream to a compatible amp or decode onboard the player.

The player's menu system is decent enough, but it lacks the fluidity of those of the Pioneer BDP-LX91 and Sony BDP-S5000ES players. Matters aren't helped by a remote that is slow to react: the buttons certainly require a particularly firm prod.

A Realta video processor is in charge of providing the best picture quality possible. It works in conjunction with noise reduction technology and Denon's proprietary Pixel Image Correction, which claims to promote a more natural picture that's smoother with movement.

When a film is playing, you can go into the player's menu and alter picture settings such as chroma level, contrast brightness and gamma. And, as an added bonus, you can then store your preferred settings in individual memory presets.

Switch over to the vibrant Blu-ray version of Australia and the Denon laps up the glorious transfer. Those expansive shots of the Aussie outback look particularly impressive. Compared with others in this test, colours do appear marginally overcooked, but you're still enjoying a very good image.

Sonically, the Denon produces a nicely listenable sound. The player maintains an even tonal balance and in two-channel mode handles the bounding bass and powerful treble of The Prodigy's Invaders Must Die with ease.

Dynamically, the likes of the Pioneer BDP-LX91 and Sony BDP-S5000ES disc-spinners have more in reserve but the Denon is still a competent CD player by a Blu-ray player's modest standards.