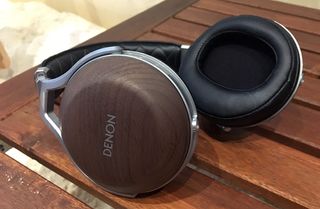 Denon has announced a new pair of flagship over-ear headphones for 2016, the AH-D7200.

Looking the part in a real wood design, the premium cans pack Denon’s custom-developed 50mm Free Edge driver, designed to deliver the performance of a high-end loudspeaker in an over-ear headphone.

The wooden earcups sit on a durable metal frame, with well-cushioned artificial leather earpads and headband.

It features a 3.5mm detachable cable system and comes with two options in the box – a 7N purity cable or an Apple-compatible cable with inline mic and remote. They will be available in December for £600.

The AH-C821 sit at the top of the range, with dual air compression drivers in each earphone for a good bass response, and a dual direct wire to each one of them for the best in purity – a world first, according to Denon. They’ll come in an aluminium die-cast resin hybrid housing to protect against vibration and are due in September for £150.

The AH-C720 and AH-C620 sit just below these, and offer single 11.5mm high-end dynamic drivers and the same vibration-proof design – you’ll just get a better, high-grade audio cable on the C720s with Denon's Radical Cascade Damper to stop cable noise. Expect both pairs in September for £119 and £80 respectively.

Finally, for sporty types, the AH-C160W follow on from Denon’s C150’s from a couple of years ago and claim to be more comfortable, 20% lighter, have a more robust Bluetooth connection and pack a higher waterproof rating. They’ll arrive in November for £129.