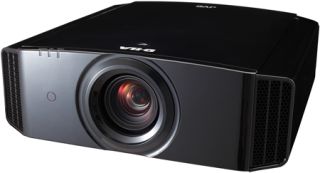 The DLA-X90R, DLA-X70R and DLA-X30 projectors all use D-ILA projector technology, are 3D capable and boast a host of new features, including: reduced crosstalk and brighter 3D images; parallax adjustment so you can choose the degree of 3D you like; anamorphic lens support, and a built-in 2D-3D converter based on JVC's $30K pro converter.

The flagship DLA-X90R model comes with 3D glasses and transmitter as standard, plus a three-year warranty. It offers a claimed contrast ratio of 120,000:1.

That's a signifcantly lower figure than the million-to-one dynamic contrast claimed for the new Sony 4K design, but JVC claims: "our figures indicate the intrinsic ability of the projector to show contrast simultaneously, not dynamic iris figures to artificially inflate contrast ratios". `As ever with contrast ratio claims, the proof will be in the viewing.

Both the DLA-X90R and the DLA-X70R are THX 3D Certified, and use JVC's advanced e-Shift technology - originally designed for its even-higher resolution Super Hi-Vision projector - to upscale Full HD images to 4K.

The DLA-X70R has a claimed 80,000:1 contrast ratio and a two-year warranty; the 3D glasses/transmitter are optional with this model.

JVC has also made a new design of 3D glasses available to users of these new and its existing 3D projectors. The new PK-AG2 active-shutter glasses are lighter and more compact than the original, PK-AG1 design, and are also rechargeable. The 'AG1 glasses will remain available, as their larger design is better suited for users whom already wear specs.

We hope to review the new 4K JVC projectors - plus bring you UK prices - as soon as possible.