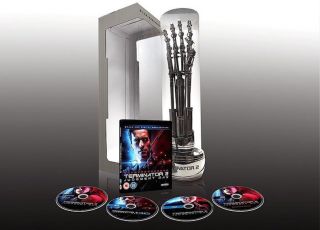 One of the most iconic robots in cinema history is the Cyberdyne Systems Model 101 Series 800 Terminator featured in, unsurprisingly, the film Terminator 2: Judgment Day (and, for that matter, The Terminator, Terminator 3: Rise of the Machines, Terminator Salvation and Terminator Genisys)

But the reason we're focusing on Terminator 2: Judgement Day is because it's soon to be available as a 4K HDR Blu-ray complete with life-sized T-800 endoskeleton arm signed by director James Cameron. UK pricing is yet to be confirmed, but in the U.S. you're looking at $175.

Only 6000 will be produced but, if you'd rather skip on the robotic appendage, you can pick up a normal edition of the UHD Blu-ray for £20, which will include both the UHD Blu-ray and the HD Blu-ray.

If you are picking one up, why not grab a mechanical skull amplifier while you're at it?