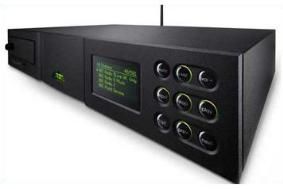 And while the idea of a complete, just-add-speakers system is nothing new, Naim has taken the concept further than most, combining the usual functions of a CD receiver with onboard wireless streaming for music stored on a home network and internet radio.

The system even has onboard digital-to-analogue conversion for external sources, meaning that you can hook up devices such as games consoles or TV set-top boxes.There's a total of five digital inputs.

The transport uses Naim's familiar magnetic clamp system, and this is "the first Naim player to utilise the new, more rigid, beam-strength mounting of the swing drawer on the front panel supported by the base."

The 50W per channel stereo amplifier is derived from the Nait 5i, and has conventional line inputs as well as those digital ones (with digital-to-analogue conversion derived from the CD5x). There's also both a powered input for a Naim phono stage and preout connections to allow a Naim power amp to be added.

In addition, the system has FM and DAB tuners, that wireless streaming ability, and separate connections for USB memory sticks containing music, iPods (using a dedicated connecting lead available as an accessory) and MP3 players.

Portable connectivity
The front-panel USB socket allows the system to take over control of, and display content stored on. most MP3 players, while the optional n-Link cable "allows the NaimUniti user to connect and charge their iPod through the NaimUniti's dedicated rear panel iPod input.

"Connecting an iPod to NaimUniti via the n-Link also enables iPod control and display of music content via the NaimUniti front panel."

The system will also work wirelessly with UPnP devices to stream content, and its radio presets work transparently across internet, DAB and FM broadcasts.

The NaimUniti will be available in April.