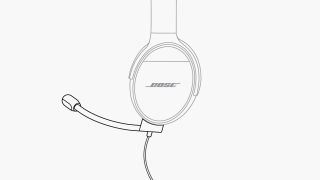 Expected to be called the Bose QC35 II Gaming Headset, it looks very similar to the current Bose QuietComfort 35 II headphones but comes with a detachable boom microphone for wired gaming use.

The video shows how a boom microphone will slot into the underside of one of the earcups and, while it may well be simply a USB connection, the footage shows a plug shape which will not fit current models of the QC35 IIs. In other words, it doesn't look like the microphone will be sold as an upgrade for the standard versions of these cans. This is, of course, only a sketched video, and these kinds of details are, obviously, open to change.

What does seem more certain is that the microphone will only work as a wired option and will automatically shut down the Bluetooth functionality of the headphones once slotted in. The headphones will stick with the full set of remote controls as seen on the current QC35 IIs and also feature voice assistant functionality too.

No word on launch date, pricing or anything official from Bose but, with this level of detail in the app update, it doesn't look like we'll have to wait too long.