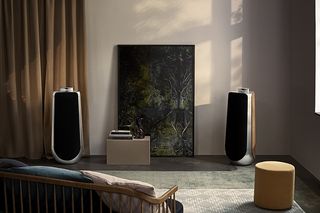 We still remember the day B&O launched its £27,000 state-of-the-art BeoLab 90 speaker to celebrate its 90th anniversary. After all, a 137kg monster of an active speaker housing eighteen drivers and resembling the sort of architectural design typically bestowed upon 21st century skyscrapers is hard to forget.

Now, almost two years later, we have the BeoLab 90's (slightly) more humble descendant, which B&O claims offers much of the BeoLab 90’s technology in a lighter, more compact package.

The BeoLab 50, which we have to say looks very ‘B&O’ with its silver-polished aluminium surfaces and striking oak lamellas, also features Active Room Compensation technology. This calibrates the speaker’s sound according to the shape and size and of the room in which it sits, while also considering room furnishings and your listening position.

Beam Width Control technology (also borrowed from the BeoLab 90) allows you to "change the width of the sound". Do you want want a 180-degree spread of “room-filling” sound for your Saturday night soirée, or a narrower sweet-spot for a more low-key family affair?

The BeoLab 50 may be a fair bit shy of the BeoLab 90’s 8200-watt horsepower and eighteen drivers - but its three amplifiers still manage to deliver 2100 watts, split between a 2cm Acoustic Lens (which, as on the BeoLab 20, rises gracefully from the top of the speaker), three 10cm midrange drivers and three 25cm woofers.

What the BeoLab 50 can claim over its bigger sibling is the practicality to fit into a wider variety of living spaces. 104cm tall, 46cm wide and tipping the scales at 61kg, they are - B&O claims - a floorstander that "fits in anywhere”. We don’t know about that ,exactly - but no, you don't need a crane to lift these into your living room.

As you’d expect for a speaker of this nature, connections are ample. A pair of RCAs provide an analogue connection, and USB and coaxial inputs are capable of supporting files up to 24bit/192kHz. There’s also an optical input for playback up to 24bit/96kHz and, last but not least, wireless connectivity is based on the multi-channel WiSA technology.

Naturally, there's an app. The Bang & Olufsen app opens the door to smartphone or tablet control, multiroom functionality and access to music streaming services like Deezer and TuneIn. It can also be used to wirelessly connect to a BeoVision TV.

Bargain? We hope to find out soon…

Bang & Olufsen at 90: behind the scenes

14 of the best hi-fi speakers

Save over 50% on What Hi-Fi? and get a wireless speaker too