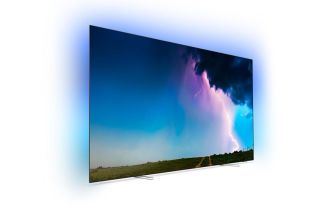 The cheapest Philips OLED TV of the year now has £100 knocked off thanks to the recent bout of Black Friday TV deals. The 55in Philips 55OLED754 is now just £989.

The secret to the low price is that this 2019 OLED TV in fact sports one of Philips's 2018 OLED panels and the older, Philips second-generation P5 picture processor, but don't let that put you off.

While it's not a set we've reviewed, the Philips OLEDs of this year and last which we have looked at have consistently scored four and five-star scores across the board.

Unlike the majority of Philips TVs, which are 'powered by Android' and 'Google Assistant compatible', the OLED 754 uses the Saphi smart platform and can be voice controlled via Alexa instead.

A button on the remote launches the voice assistant, so you can speak into it to switch sources, open apps and ask questions. The TV also features Philips 3-sided Ambilight technology, which puts on a colourful display to match the content you're watching.

The other handy feature of this 4K OLED TV is that it supports the full flush of HDR10, HDR10+ and Dolby Vision HDR formats. It's also available bundled with a Philips Dolby Atmos-enabled soundbar for £1168.