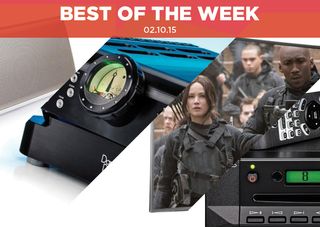 This week Samsung strenuously denied attempting to rig energy efficiency tests in the wake of evidence appearing in The Guardian.

Elsewhere it was a much mellower week for hi-fi companies, with Google announcing a raft of new products (including the 5X and 6P smartphones). Cambridge Audio also announced a new wireless speaker and its first ever soundbar.

Fresh from the test rooms, we had a review of Samsung's UE65JU8500 4K TV, Cyrus's CD t transport and an expensive but excellent amplifier in the Dan D'Agostino Momentum Integrated Amplifier.

It's also new What Hi-Fi? week with the November issue now on the shelves. Inside, you'll find the latest news in home cinema and hi-fi, with reviews of 4K TVs from Samsung and Sony, a look at six £1K standmounters and reviews of the latest Bluetooth speakers.

Samsung rallied back at accusations it had rigged energy tests after an article in The Guardian claimed that the Korean manufacturer's TVs appeared to be more "more energy efficient in tests than in real life".

The issue concerned the use of motion lighting mode that – according to an independent report compiled by ComplianTV – saw the power demands dropped from 70W to 39W once the test began.

The discovery has led to the European Commission to wade in, saying it will investigate any evidence of cheating and that it will improve energy efficiency regulations to outlaw any use of supposed 'defeat devices' on consumer products.

Google took to the stage to unveil its latest devices, with the company's Nexus 6P and Nexus 5X smartphones outed, along with Chromecast 2 and Chromecast Audio sticks.

Both phones carry a fingerprint sensor, a Type-C USB connector (for faster charging) and Android 6.0 Marshmallow. They'll be out in the coming weeks.

Moving on to streaming, the original Chromecast has been cast aside, with Google claiming its successor is faster with a new, slimmer design. The Chromecast Audio dongle is similar to the media stick, with a focus on audio. Features include multiroom synchronisation and the ability to cast music from any device on the same network.

Both are out now, and can be bought for the princely sum of £30.

Cambridge has announced a new speaker called the G5 that will target the premium end of the wireless speaker market.

Continuing on from the company's Go, the G5 has aptX Blutooth with NFC and a built-in rechargeable battery that Cambridge claims will give you a maximum of 20 hours of playback.

It's available now for £230 and you can read what we think of it in the latest issue of What Hi-Fi?

The G5 wasn't the only product Cambridge revealed, with the company joining the likes of Monitor Audio and Dali in revealing its first ever soundbar.

The TVB2 has three HDMI inputs with 4K pass-through, optical digital and auxiliary inputs. Bluetooth arrives in its 4.0 version, not aptX.

Sonos Trueplay: What is it? How can you get it?

Barring the recent 'controversy' over its TVs, Samsung has been on a great run of late, especially with its 4K efforts. In the UE65JU8500, Samsung has delivered a great performer.

If the £3000 price doesn't dissuade then you have a TV that looks fantastic out of the box, with stellar detail and convincing colour reproduction across 4K and lower resolutions.

So while sound output is nothing to shout about and the Tizen OS isn't quite the match of others, this is a TV that fully delivers on delivering big screen thrills. Sit back and enjoy.

Just by looking at the box you can tell it's a Cyrus product.

The CD t is a transport, meaning you'll need a (good) DAC to get it working. Once you do, the CD t shows off how good it is. It has superb control over dynamics, weaving songs together with precision and clarity but never sounding dry or clinical.

The look won't be for everyone, but the CD t is more than its appearance. It's a fantastic CD transport.

This amplifier has a long name and a very big price. Is it worth the expense?

Yes. For those with money to burn. It's an amp that's as enjoyable to use as it is to listen to and ranks as one of the finest amplifiers we've ever heard. Clarity, dynamics and rhythm are all treated superbly.

If you can stump up the dosh, you won't regret it.