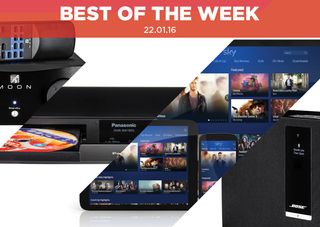 This week Sky overhauled its Sky Go mobile app, research in the US showed that users are more likely to pay for music if it's of good quality and Pro-Ject unveiled a neat solution to cleaning your vinyl records.

On the reviews front we had a trio of four-star reviews with Bose's SoundTouch 30 wireless speaker, Panasonic's DMR-BWT850 Blu-ray recorder and Moon's Neo 230HAD desktop DAC.

MORE: Save £10 on Amazon UK until midnight tonight

Sky is giving its mobile TV service Sky Go a refresh with changes rolling out to the online web player and Android devices this week.

The homepage for the service now has a new look, with nips and tucks made to the usability and spotlighting of on-demand and live content.

New features will be added throughout 2016 as the company gears up for the release of Sky Q.

iOS users haven't been left out of the mix. They'll receive the new update in February.

MORE: Sky Q: What is it? When can you get it

Results from a study conducted in the US have revealed that music customers value sound quality as a reason to upgrade from a free streaming service.

According to the report, those willing to pay for a premium experience are "younger, more affluent and much more enaged in music buying and listening".

The report perhaps doesn't bode well for services that stream low bit-rate tracks as respondents indicated that sound "as good as the recording studio" is another important factor in upgrading.

Pro-Ject has come up with a novel way of cleaning vinyl records with the VC-S wet cleaning machine.

Cleaning records is achieved by placing the record on the support clamp and applying a cleaning fluid that's sucked up by a vacuum arm, removing any impurites from the grooves.

Apple shuts down iAd platform, taking iTunes Radio with it

Bose is on the third generation of its SoundTouch 30 series and this is the best one Bose has produced. Its room-filling sound, plethora of features and intuitive app are all excellent reasons for buying it. AirPlay makes way for Bluetooth, so that should please Android users.

The sound could do with more expression and insight, but this Bose is well worth an audition.

You can record live TV, burn content to disc, flick through its catch-up programmes, dip into Freeview Play as well as play 3D and (homemade) 4K content. There's little it doesn't do.

At £570 though, it's more expensive than a Blu-ray player and a set-top box together so this Pana is not the cheapest of options.

Moon has produced its first DAC aimed at the desktop audience and the results are good.

In a fierce market the 230HAD succeeds partly because its fluid sound is an eminently enjoyable one.

Its organisation could be tighter and dynamics could be more expressive, but it does well to hold its own against rival products from the likes of Chord and Naim.