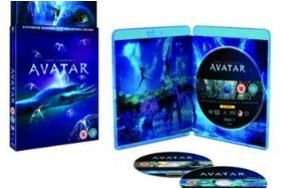 If you couldn't get enough of James Cameron's blue planet, then you'll be pleased to hear there's over eight hours of unseen material on the Avatar 3-disc special edition.

On sale on November 15th, the Extended Collector's Edition will be available on Blu-ray and DVD and packs a formidable amount of content.

Director James Cameron says he wanted "everything worth putting into a special edition" included and to make it "the ultimate box set", but then he would say that.

Also in the box is a feature-length documentary covering the "16-year filmmaker journey", which sounds something of an epic in its own right.

If you really want to push the boat out there's a 'UK Fan Pack', limited to only 1000 copies and packaged in a numbered box and complete with a film cell signed by James Cameron. It's yours for £100.

Avatar, James Cameron's sci-fi epic, has broken the UK sales record for the first day release of a Blu-ray disc.

The film sold 222,824 copies on Monday, racking up more sales in one day than the previous record holder The Dark Knight sold in its first week.

On the same day, it was revealed that Avatar had become the fastest-selling DVD and Blu-ray release in North America, shifting a staggering 6.7 million copies in just four days.