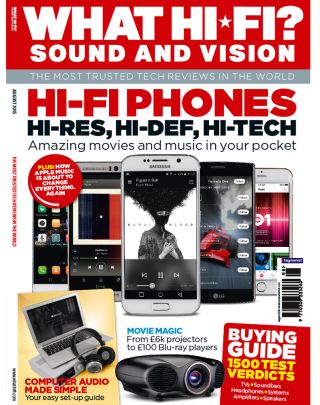 If all your music files are stored digitally, a decent digital-to-analogue converter is a must. In the August issue we tell you what you need to know about this once humble, now absolutely crucial, cog in your hi-fi system...

Ultra HD Blu-ray players are on the horizon, but now is the time to grab yourself a bargain Blu-ray spinner. After all, 4K Blu-ray discs won't appear in their thousands overnight, so a standard machine will be able to play the majority of movies on our shelves for some time to come. Sony was king of the budget deck in 2014, but a new year brings new models from all the usual suspects, including Panasonic, Samsung and LG.

If you're drowning in a sea of recently ripped digital music files, or want to convert all your physical music from vinyl or CD into megabytes, then we've got the perfect feature. We take you through the who, what, why and how of creating a smart networked system for your music collection.

Phones aren't just smart these days, they're powerful multimedia players capable of playing high-res music and high-def video. In our August supertest we put eight of the best newcomers through their paces, ranging from the shiniest, priciest flagship phones from Apple, HTC, LG and Samsung to smaller, more cheerful budget models from Acer, Alcatel, Huawei and Honor. There's something for everyone - but there can be only one winner.

Your expensive surround-sound system deserves a thrilling picture, and there's no doubt Sony and Epson are two of the best in the business at delivering one. We pitch Epson's first high-tech laser projector, the EH-LS10000, aginast a formidable 4K rival, in the shape of Sony's VPL-VW300ES.

Apple's music streaming service is live and gunning for the likes of Spotify, Tidal, Deeezer and Qobuz. Will it redefine the market? Possibly. This month's Insider section brings you all the vital facts and figures behind the new kid on the block...

Meanwhile, this month's Temptations include a striking pair of £10k Tannoy Kensington GR loudspeakers, and an equally eye-catching CD streamer from Burmester, the £12,500 Musiccenter 151.

And don't forget, you can download the digital edition of the magazine directly to your smartphone or tablet.