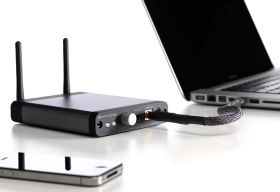 Audioengine has launched two new DACs - both of which can handle better-than-CD quality music, and one that also offers wireless transfer of your computer-based tunes.

Headphone, USB and optical connections also feature on the new DACs, which cost from just $169.

The Audioengine D1 (pictured above) is a USB DAC - based on the AK4396 chipset – that supports computer-based music files of up to 24bit/192kHz resolution.

It also includes a headphone output, plus an optical input designed for DVD/Blu-ray players, games consoles and set-top boxes.

Audioengine claims the D1 is plug-and-play for Mac and PC, with no special software drivers required. It also draws its power from your computer's USB socket, so doesn't need plugging into the mains - making it an ideal portable DAC to pack with a laptop.

The second new DAC is a wireless model - the Audioengine D2 (below left). Based on the Burr-Brown PCM1792 chipset, the DAC can handle audio files up to 24bit/96kHz resolution.

It uses a "closed-system" wi-fi configuration, with Audioengine saying its proprietary RF technology ensures data integrity, with no impact on existing routers or networks

"D2 truly is a breakthrough product for computer audiophiles", claims Dave Evans, Audioengine director. "The ability to stream bit-perfect 24/96 audio wirelessly from your computer right to your music system not only keeps your computer away from the rest of your audio gear, but also minimizes nagging problems such as ground loops, induced cable noise, and extra jitter".

Evans continues: "The higher-end audio community has embraced computer audio but understandably consider it a sacrilege to put a computer next to their expensive music system. The D2 solves this dilemma and also includes a USB-to-SPDIF wireless bridge for those that already have a favorite DAC.”

The D2 Sender has USB and optical inputs, while the D2 receiver features optical and RCA analogue outputs. The D2 Sender can simultaneously transmit audio to up to three receiver units.

The Audioengine D1 DAC has been launched in the US at $169, with the D2 Wireless DAC costing $599 for a sender/receiver pair; additional D2 receivers will be sold separately. UK pricing has yet to be confirmed.