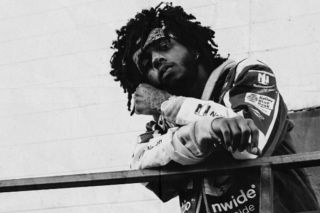 Apple Music has announced a new series, focusing on a different emerging artist each month. Called Up Next, it will comprise a mini-documentary, spotlight on the artist's latest album, an interview with Beats 1 DJ Zane Lowe and special playlists.

Chosen artists will also feature on The Late Late Show with James Corden, which is a partner of the programme, CMU reports.

First up is 6LACK (pronounced 'Black'), a singer/songwriter/rapper from Atlanta. He's best known for last year's single PRBLMS, and is signed to both LoveRenaissance and Universal's Interscope Records labels.

It's not the only piece of original video content coming to Apple Music. The streaming service announced last week it will be the exclusive home to a documentary about music industry legend Clive Davis. Clive Davis: The Soundtrack of Our Lives will tell the story of Davis's career working with Bruce Springsteen, Carlos Santana, Earth, Wind & Fire, Puff Daddy and Whitney Houston, among others.

It also recently signed 808 The Movie (a documentary about the Roland TR-808 drum machine), and Taylor Swift's concert film of her album 1989. Plus an app-based reality show called Planet of the Apps and, of course, Carpool Karaoke.

Not to be outdone, Spotify has announced a few exclusive shows of its own, among them a hip-hop take on Carpool Karaoke and a documentary about Metallica's early years.