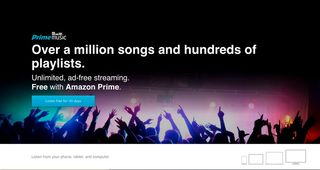 The fledgling service was made available to Amazon Prime members in the US last month, offering "ad-free streaming" and promising a catalogue of songs and albums that are at least six months old – as opposed to recent releases.

And in a move that looks likely to cement its position already, Prime Music now offers a large number of new songs from the likes of Miles Davis, Deadmau5 and Oasis, as well as artists not found in the catalogue previously.

Meanwhile, the "hundreds of new Prime Playlists" will include Upbeat Indie Vibes, Electronic Beats for Work and Rainy Day Jazz among others – playlists that Amazon have designed to match your moods and activities.

"The response we’ve had to Prime Music has far exceeded our expectations and we’re excited to make Prime Music even more valuable for Prime members,” said Steve Boom, vice president of Digital Music for Amazon.

"We’ve already significantly expanded the Prime Music catalogue. Members have been telling us how much they love Prime Playlists, so we’re also pleased to offer hundreds of new playlists to make it easier to enjoy the best of Prime Music."

However, there still seems to be no word on when we might be able to expect the arrival of Amazon Prime Music in the UK, with Amazon Prime Instant Video currently the only streaming service available to UK members.