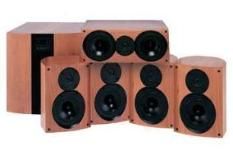 Quality build, engineering and performance from both DVD and CD

Tempting though it may be to think of Naim as a dyed-in-the-wool two-channel company, in fact the Salisbury manufacturer has been making surround equipment for many years.

The Naim AV products serve two functions. One is to allow Naim enthusiasts to add surround sound to their systems without compromising on musical ability; the other, rather more prosaic job is to ensure buyers remain ‘within the fold' when building home cinema set-ups.

As a result, the company has the processor, a range of multichannel power amps, and a choice of two centre channel speakers designed to be used with the Naim stereo speaker systems.

Under the ‘n-Series' banner comes a bookshelf/standmount satellite speaker, a dedicated centre channel model and a big active subwoofer, complete with remote control and a bank of presets to store favourite combinations of set-up parameters.

High-quality build and finish
Beside the miniature satellite speakers found in many a lesser package, the Naim speakers are hardly small – the satellites stand the better part of 30cm tall, and are broad and relatively deep, while the subwoofer is almost 40cm on each side and weighs a substantial 39.6kg – but they are a lot smaller and easier to accommodate than the company's existing range, which includes the huge 1.2m tall DBL flagship speakers.

What's more, the designers have clearly spent a lot of time thinking through the design of the system: the speakers have a novel mounting system to attach them to the stands, which are S-shaped to give stability and have a T-shaped cross section to give rigidity without excessive bulk or weight, while the subwoofer hides all its connections below and has that neat remote control system.

Finishes are of a very high quality throughout, with a choice of a light cherry or even lighter maple wood finish, or black available if you really want it.

The n-SATS speaker uses familiar Naim technology, in the form of a 19mm tweeter with an annular radiator diaphragm, and designed for wide and predictable dispersion, and thus enhanced focus and resolution. This driver is housed in its own chamber within the dense, thick-walled, mass-damped enclosure, and matched with a 13cm pulp-cone mid/bass driver with a central phase plug and a low-loss suspension.

A sealed box design
The speakers are of a sealed-box design and are designed for single-wired operation. Naim offers a pair of 4mm banana plug sockets to connect them up, along with one of the company's usual two-pin speaker plugs.

Remove two hex-headed blanking bolts in the rear of the speaker and mountings can be bolted on to hang the speakers on dedicated stands, two cotton-reel-shaped bosses slotting into U-shaped cut-outs on the stand, and a grub-screw on the stand itself allowing adjustment of the tilt of the speakers.

The stands themselves are a £125-a-pair option for the £695-a-pair speakers – wall-brackets are also available – and offer pins that fit down their spine to hold and hide speaker cables, which exit through a hole in the spiked base-plate.

Assembling the stands and installing the speakers on them didn't take too long, but we could have done without the requirement for no fewer than four Allen keys.

The £500 n-CENT centre speaker uses the same driver complement as the n-SATS, but with an extra mid/bass drive unit; again separate chambers are used within for each driver, while the enclosure has an upward slant to its baffle to facilitate mounting below a TV screen. No dedicated stand is provided for the n-CENT, but it's small enough to slip into many a TV stand or AV support system, a position for which its sealed design is particularly suitable.

Finally, there's the £1495 n-SUB subwoofer: as already mentioned it's big and heavy, but it's also beautifully finished to match the speakers, and has its 25cm drive unit, which has an extremely stiff cone, a long-travel voice-coil and a large surround to keep its movement pistonic, on the rear panel, with heatsinking for the internal 350W amplifier, plus the controls and display, on the front. Underneath are the inputs: mains and the usual LFE preamp-level input, plus stereo connections on both phono and speaker sockets, along with an RS232 control connection.

Clearly with such a range of inputs Naim intends this subwoofer to be used not just with AV receivers or processors with a dedicated LFE output, but also in stereo systems, whether fed from a preout pair or inserted between a preamplifier and power amp – for which preout sockets are provided – or just connected in parallel with a stereo pair of speakers.

Indeed, although Naim's publicity makes much of the n-Series as a surround sound solution, those with a liking for the sound and a dedication to stereo could simply buy the subwoofer and a pair of the satellites and run them from a conventional two-channel amplifier, as a more compact and room-friendly alternative to a pair of floorstanding speakers, and offering the opportunity to tune the bass to suit the room and personal tastes.

Performance
Aside from the slight Allen key confusion already mentioned, our only other problem with the system set-up concerned the very long floor-spikes provided with the subwoofer: these were very stiff in their threads, and proved hard to screw right in, and we managed to break one of the spikes while moving the sub into position after attaching the spikes. Curiously Naim supplied five spikes for the four threads on the unit – coincidence or more? – so we were able to extract the broken threaded portion and get the unit levelled.

Fascinated by the possibility of using the speakers in a 2.1 configuration as well as in a full 5.1 set-up, we tried the two set-ups with different audio systems: for stereo we used Sony and Marantz SA-CD and CD players along with an old combination of Marantz Music Link preamp and monobloc power amps, and a massive Michaelson Audio Chronos valve preamp and power amps system, while 5.1 working was powered by the TAG McLaren Audio AV32DP processor and 100x5r:10 power amp, with the Naim DVD 5 as a source.

Starting in stereo, we were swiftly assured of just how well these speakers ‘hang together' to create the impression of powerful, beautifully extended bass emanating from the small n-SATS satellites.

Fast, clean sound without harshness
The sound is typically Naim of the modern school: fast, clean and fresh, with excellent detail resolution and a really impressive handling of complex rhythms, but with not a hint of that hardness or excessive brightness some consider to be the hallmark of ‘old school' Naim equipment.

We found ourselves spellbound by the focus on offer here, and the way in which the 2.1-channel Naim speaker set-up created solid, three-dimensional sonic pictures, and placed performers within them in an entirely credible fashion.

Whether with intimate vocal or chamber recordings or large-scale orchestral music, the Naims showed just the right balance between speed and scale, the bass being full but tightly controlled, the midrange lucid and persuasive, and the treble at once wide-open and sweet.

Certainly these speakers don't pull their punches, and those used to a warmer, smoother sound may find them a bit of a shock, but they're hugely enjoyable.

Add on the rear speakers and centre, and switch to a surround amplification system, and those same attributes serve multichannel music from SACD as well as they do Dolby Digital and DTS sound from DVD-Video.

The presets on the subwoofer make it easy to switch from a system in which the bass is derived from the left and right channels to one running a dedicated low-frequency ‘.1' channel, and the speed of the entire set-up delivers high-speed action as well as it does high-quality music discs.

We have been enjoying the BBC/Opus Arte Elgar's Enigma DVD recently, and the Naim speakers sounded as good with the DTS soundtrack of the documentary as it did when playing the concert performance of the Enigma Variations in Worcester Cathedral, with an excellent sense of the ambience surrounding the performance and lifelike timbres and pace.

Whether you choose 2.1 or 5.1, or buy extra speakers to build a complete ‘extended surround' system, this Naim series is a fine buy, and more than a match for much larger speakers at the same kind of price. Add in the style and quality of engineering and build, and you have a very interesting alternative to conventional speaker thinking.