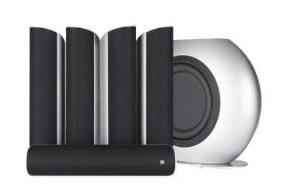 We thought we’d like the style, and we do – it’s the sound that leaves us a bit cold

KEF has had plenty to crow about in the past few years, almost always presenting its packages with more than a dollop of style.

We'll point out now that this system, from the KHT – KEF Home Theatre – range, is due to be phased out in the summer, so you might have to be on your toes to get your hands on one (if that doesn't sound too uncomfortable).

This set was reduced to £1300 at the end of last year, so is now very affordable. You wouldn't guess that out of the box; the HTS5001.2 satellites and the HTC5001.2 centre have an eye-catching aluminium column design available in matt silver or gloss black.

There are three drivers in each, including a 3in Uni-Q array driver. The HTB2SE subwoofer looks like a PV1 with a sawn-off top, standing on its own small stand, as the satellites do, and boasting a 10in driver.

One thing to point out: we couldn't manoeuvre our terminated speaker cables in to the connections, so you'll probably need bare-wire speaker cable.

A lacklustre sound
Once up and running, our main gripe is a lack of excitement. The Lord of the Rings Blu-ray boxset has myriad chances for your system to let fly, but this KEF doesn't take the opportunity.

Sound effects that should have punch and power sound lacklustre, struggling to draw us in to the action, with even the most explosive episodes sounding relatively subdued.

Despite this, the KEF system doesn't boast the smoothest of tonal characters, certain frequencies hardening up at loud volume.

The subwoofer is a little loose around the edges, bass notes lacking precision and giving the rest of the system a less-than-solid base on which to build.

Yes, it's cohesive, integrates well enough and there's decent detail on show, but compared with the competition out there, the KHT5005.2 isn't quite at the races.