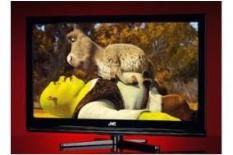 Cheap, isn't it? This JVC is an affordable TV and a cursory search online will show it can picked it up for closer to £500 at some retailers.

This set has been around a little while and, in terms of specifications at least, it shows. While the likes of Panasonic and Sony have been busily cramming as many of the latest features on board the latest sets, JVC has been a little slower to act.

In fact, while the company's home cinema projectors stand pretty as some of the most advanced around, JVC's LCD TVs seem to have been left to gather dust.

No HD tuner fitted
So if you expect an HD tuner, then you're out of luck here. Likewise, don't expect anything by way of streaming media capabilities or any internet applications.

Instead the focus here is simply on picture performance. It's a Full HD resolution set, with three HDMI inputs, the latest of JVC's DynaPix HD processing engine, a USB input, digital optical audio output and a standard definition Freeview tuner.

JVC has given its TV menus something of a freshen-up but we still can't help but think they convey a slightly tired message, being a little sluggish to move around and looking a touch underwhelming.

Feeding the best quality picture to the screen – Avatar on Blu-ray is currently taking that accolade for us – there's much to enjoy about the picture. It's vivid and punchy, with contrast levels strong and skin tones faithfully rendered.

Picture lacks subtlety
But there's little subtlety on display here, with colours drawn in broad brush-strokes. Edges could be more sharply drawn, too, and motion's sometimes a little shaky.

Without the advantage of HD source material, the JVC struggles to keep in touch with the competition. Digging out an old favourite DVD, Training Day, the LT-37DR1BJ does well enough to uncover detail in dark scenes but the picture lacks definition and insight.

Switch to the Freeview tuner and it's watchable but there's some noise and instability, while sonically it sounds on the thick side.

With such capable and highly specified performers at affordable prices around, even budget offerings such as this JVC need to up their game.