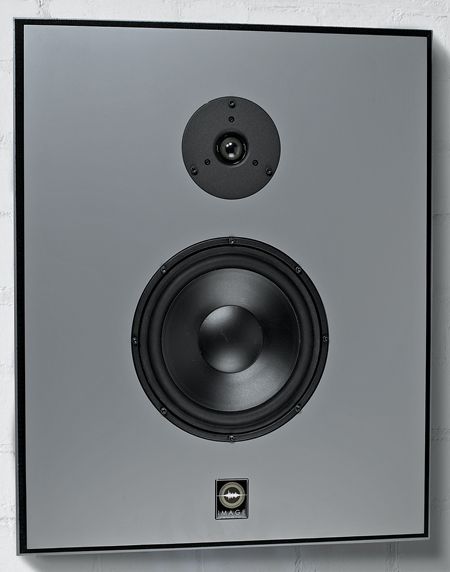 Deeply impressive. The IA8s are genuine, stylish rivals to a conventional speaker setup

Image Audio makes nothing but on-wall speakers. The IA8s are the company's flagship, and are significantly wider and heavier than the Monitor Audio SoundFrame 1s.

That's reflected in their presentation – placed on the wall on their secure wall-mounts, the Image Audios are prodigious, with all the scale of a large pair of stand-mounted speakers.

With the boisterous Inception soundtrack, the IA8s thunder through the lows, sweep through the broadest dynamics and create a huge soundstage, wherever you sit or stand.

Impressive scale and detail
The substantial 20cm mid/bass drive units underpin that ability, as do the ports.

The heavily braced cabinets sport a pair of long (but comparatively small-
of-diameter) ports that run from each side of the drive unit down towards the speakers' base, exiting from discreet holes at the bottom of the cabinet.

The Image Audio's high-frequency performance impresses too, although it takes some getting used to. These are very revealing speakers, their substantial soft-
dome tweeters and crossovers freighting the sound with an analytical and almost aloof character.

Instrumental strands are easily deciphered, voices have the requisite presence and soundstaging is strong - but by the same token, there seems a slight lack of excitement to the presentation.

In that sense, the Image Audios seem a solid reflection of their designer's preferences and pro-monitor, studio-based background: they're commendably precise, but at times, sound a little detached next to the similarly expensive PMC Wafer 2.

Finish could be more luxurious
If there's another criticism, it centres on the finish, which is decent, but doesn't seem as luxurious as you'd hope for given the price (although build quality is fine).

The biwire terminals on the rear panel will demand some creative cabling, too: the IA8s feature a neoprene rubber seal on their rears designed to securely 'lock' the speaker to your wall, but some chunky speaker cables will make that impossible
to use.

Chase your cables into the wall and you'll obviate the problem – but then that rather detracts from the simplicity of using on-wall rather than in-wall speakers.

On the other hand, at least the grille prices seem very reasonable: you can select the grilles of your choice from its library of images as part of the purchase price, while optional grilles cost a modest £50 (per pair) extra.