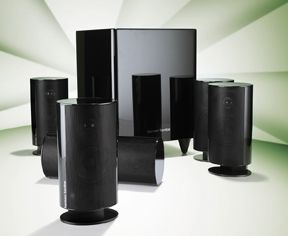 Up against five-star rivals such as the Canton Movie 125 MX, KEF KHT1505 and Tannoy HTS10, the Harman/Kardon HKTS20 finds itself in a tough place.

As baptisms go, it doesn’t get fierier – but as it has proved many times, Harman/Kardon isn’t one to shrink from a fight. The HKTS20 certainly does everything right when it comes to showroom appeal and spec-box ticking.

It consists of four identical satellite speakers, each with an integrated stand and cable management, with a 13mm dome tweeter and 80mm midrange driver per cabinet.

The centre channel has two midrange drivers and a 19mm tweeter, and all five have the sort of spring clips the Canton has (but, mercifully, much easier to get at).

And unlike the Canton package (or the KEF, for that matter) the HKTS20’s subwoofer has had just as much attention paid to its looks as its partnering speakers.

Like the majority of speaker packages, the Harman/Kardon benefits from an extended period of running in and, duly indulged, its sound is admirable.

Satellites and sub integrate well
The Dolby TrueHD soundtrack to There Will Be Blood shows the HKTS20 off to good advantage: dialogue is characterful and robust through the centre channel, while all five speakers integrate efficiently with the shiny sub.

Low-frequency stuff is on the cautious side of punchy, but it starts and stops with alacrity and there’s reasonable tonal variation on display too.

The soundstage the HKTS20 generates is respectably large, convincingly focused and easy to follow.

Overall, the H/K plays a sensible game – what it loses in dynamism and perceived excitement, it gains in the sort of ‘safety first’ approach that makes kit-matching less of an issue than with more exuberant rivals.

Cautious with music
The same caution is apparent when playing music. Arctic Monkeys’ Suck It And See is a rambunctious recording, but in the H/K’s hands it’s a little neutered – for all its powers of resolution and unhurried way with transients, the HKTS20 saps a little vigour and delivers songs with a degree or two less giddiness than is ideal.

Of course, some listeners might find this preferable to the rabble-rousing some packages are capable of, but we’re not entirely convinced.

There’s real merit in the stance the HKTS20 adopts: it isn’t about to scare the horses and it won’t easily fall out with its partnering kit.

This does mean sacrificing some of the more visceral aspects of movie soundtracks, though – but there are worse compromises you could make.