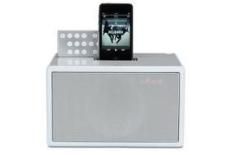 A discreet-looking, talented speaker dock that can push class-leaders all the way

GenevaSound's Model range extends from the Model XXL – a huge iPod speaker-dock-cum-TV-stand – down to the petite Model S pictured here.

This stylish little box is available in black, red or white piano lacquer finish. In the box you get a silver stand, or you can leave it on its four rubberised feet.

The speaker dock has 30W of amplification spread between two three-inch drivers. There's a 3.5mm input at the rear and an aerial socket for the built-in FM tuner.

Touch-sensitive controls
The iPod dock on top of the box is hidden when not in use. Once powered up, a built-in motor spins it into position. Next to the dock you'll find touch-sensitive controls, including a click-wheel that pays tribute to Apple's iconic design and doubles as a volume control.

Slide your finger round it and the Model S clicks like a Geiger Counter. The Model S produces a hugely entertaining sound. With iPod in place, the system brings a real sense of excitement to music. Whether you listen to Lossless or very compressed tracks, they're all dealt with equally well.

On the downside, high frequencies can get exciteable when pushed to neighbour-unfriendly volumes, but not to the extent where you'd find the sound uncomfortable.

Just when you thought it was a straight shootout between the B&W Zeppelin Mini and the Bose SoundDock II, we've now added a third five-star performer to the mix.