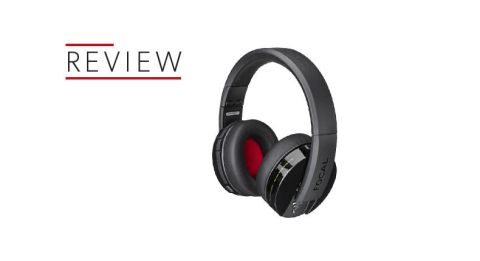 From the famed Revolution in 1789 to the concept of liberté, égalité, fraternité, the French have a reputation for respecting the notion of freedom and being unafraid to cut ties with old ways of doing things.

So perhaps that’s what French manufacturer Focal means when it says its new headphones, the Listen Wireless, are made for audiophiles “for whom freedom is essential”.

The Focal Listen Wireless look like much their wired equivalents. But while the housing and ear padding feel sturdy, we can’t say the same for the headband. Twisting it just a little results in an unappealing creak we’d be disappointed with from cheaper headphones – let alone ones for which we’d paid over £200.

They also grasp your head a little too tightly, something a few of the review team find uncomfortable over long listening periods. The adage of ‘try before you buy’ holds much water here.

The playback controls, on the wired siblings' cable, move to the earcups. Focal uses a Bluetooth 4.1 codec with aptX technology, so you can wirelessly stream music at ‘CD-like’ 16-bit/44.1kHz resolution, and there's NFC connectivity to fast-pair with Android devices.

Battery life clocks in at a claimed 20 hours, and it’s charged via a micro-USB connection. A small red light turns on around the port while it’s charging, and switches to white when fully charged - a nice touch.

Some might be a little disappointed there are no noise-cancelling capabilities in these headphones, such as can be found on the Sony MDR-1000X or Bose’s QuietComfort 35 – both of which have impressive sonic performance.

Over the past year, the price of both models has dropped, placing them in direct competition with the Listen Wireless.

We pair the Listen Wireless with our MacBook and start by playing The Eagles’ Hotel California to see how they handle the classics. The results are solid, if a little tepid.

Starting with the positives, these headphones have good understanding of the high end of the frequency range. Played through other headphones, the twanging guitar in the first section of the track can sometimes leave you wincing – but not here.

Each note is clean and well articulated, and should you listen to harsh or bright recordings these headphones will round off your sound to something less abrasive.

They are relatively detailed in the midrange too. These headphones pick out the natural vibrato in Don Henley’s voice as he strains to convey the exhaustion and stress of this endless hotel.

There’s a palpable sense of confusion to the vocal, and the Listen Wireless do a commendable job of conveying it.

We switch to Radiohead’s Paranoid Android, a song that demands constant attention to keep track of the clashing vocals, modulated guitars, and sporadic drumbeats that attack you. The Listen Wireless manage to keep each element distinct but still musically integrated - so instrumental strands remain easy to follow.

But there are downsides to the Focal approach. We’d like more dynamism to the changes in intensity when it comes to classical tracks like Wagner’s Ride of the Valkyries.

The spiralling, soaring strings don’t quite have the same stirring character as they do when played through the similarly priced Bowers & Wilkins P5s.

Similarly, the P5s offer more punch and a tighter sense of timing in the low end - the Listen Wireless go deep, but struggle to punch their weight. Bass is soft and there's a little too much of it.

One of our favourite test tracks, Crystalised by The xx, has low frequencies – whether it’s rapid kick into action or the slower bassline beats that keep the rhythm rolling – that carry enough drive that you might subconsciously start nodding along.

The Listen Wireless can't quite achieve that - ultimately they come across as a little passive and disinterested.

Focal is more than capable of making stunning pairs of headphones, but the Listen Wireless don’t quite meet the company’s usual high standards.

They’re not, overall, an especially bad pair of cans – but at their price, the lack of transparency, dynamism, and questionable perceived build quality mean it’s entirely justifiable to want more. There are better alternatives for the money.

See all our Focal reviews