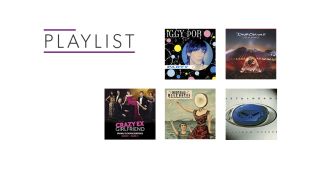 As much as David Bowie, Nina Simone, every Hans Zimmer soundtrack, migraine techno and late-80s spandex rock have become staple listening material at What Hi-Fi? towers, we're always eager to discover, or rediscover, new and old music – an easy feat nowadays thanks in no small part to music streaming services.

Every month we (figuratively) opening our test-room doors to share what we've been listening to, and the new releases we're looking forward to hearing.

It’s fair to say compilations are fairly unfashionable. Music snobs would probably suggest an individual album holds more artistic merit, while audio purists would point out compilations tend to get shoddier sonic treatment. But when serious attention to detail is given to track selection and sound quality, there is plenty to be said for a ‘best of’ approach. Even if it is a bit Alan Partridge.

Platinum Breakz was the first in a series of compilations from the influential Metalheadz label. Founded by Goldie and Kemistry & Storm back in 1994, the label released ground-breaking tracks from seminal artists during the heyday of drum ‘n’ bass. These compilations now deliver a scarily strong summation of that time, and feature artists and tracks that still influence broad swathes of dance music around the world to this day.

Drum ‘n’ bass producers, certainly in the early days, were as obsessed with production quality as they were with bass frequencies, and a recent dusting-off of the 3 x vinyl version of the release reveals this once again.

It also shows the diversity of the sound, with jazzy, vocal numbers sitting alongside darker, bass-driven tracks. Peshay’s unequalled Psychosis has rapid drums alongside smooth vocals and emotive keys, and is sure to test your system’s timing and scale, while Doc Scott’s The Unofficial Ghost aims more squarely at the dancefloor with clean, heavy-hitting drums and a text-book terrifying bass line.

With classic tracks from iconic names such as Alex Reece, Dillinja, J Majik, Photek and Source Direct, it’s a trip down memory lane for any dance music lover, while the uninitiated should prepare to be surprised at the range of sounds and styles on show. Maybe prepare your neighbours, too.

This one came out of the blue.

Having heard about the TV show Crazy Ex-Girlfriend and seen it advertised on Netflix, I settled down to watch without really knowing what it was.

It turns out it’s a comedy/musical hybrid about a woman (Rachel Bloom) who abandons her job to travel across the country to rekindle a relationship with her old boyfriend (Vincent Rodriguez III).

But we’re not talking about the TV component, we’re talking about the musical part - which is executed better than I would have imagined. Affectionately lampooning all kinds of genres, it’s an eclectic mix with big, gospel-like renditions alongside 80s riffs and efforts that sound like 90s boy-bands.

There’s plenty of clever dialogue and deft humour, but a little is lost if you haven’t seen the show. It still plays as funny on its own like I Love My Daughter (But Not in A Creepy Way), but more enjoyment is had if you have a feeling for the characters and story.

I wasn’t expecting to like this as much as I did, but it is surprisingly good. Watch the show first and then listen to your favourite songs on the album. It’ll put a smile on your face.

View My Crazy Ex-Girlfriend Vol. 1 on CD at Amazon

In The Aeroplane Over The Sea by Neutral Milk Hotel - Adam Smith, staff writer

Neutral Milk Hotel’s In The Aeroplane Over The Sea is a true lo-fi pop landmark. The combination of complex, abrasive harmonies and heartfelt, whining lyrics referencing (for example) Anne Frank’s life is something to behold. It’s raw, as if someone hooked up to the recording equipment directly into Jeff Mangum’s soul - and while some have criticised its lack of polish, its legacy lives on.

But if you think it couldn’t get much better (if you’re someone that doesn’t mind the spider-web of harsher instruments), then how about mixing it up with some hip-hop classics?

Psychosis, a video game programmer who claimed he “accidentally found audio editing software and the world has been paying the price ever since,” has overlayed Kanye West, Jay-Z, Dr. Dre - to name just a few - over In The Aeroplane Over The Sea, and the result is sublime.

The combination of West’s Jesus Walks with The King Of Carrot Flowers Parts 2 & 3 fits better than it has any right to. It’s a cacophony that’s incredibly fun. William Blake once said that “without contraries is no progression” - and that’s what this fan-album feels like.

There are probably few mash-ups that feel so naturally built and still spontaneous. It doesn’t reach to be weird but is still revelatory.

It might not be to everyone’s tastes, but it's so niche, it’s worth highlighting lest it be lost to the addles of the Weird Internet.

View In The Aeroplane Over The Sea at Amazon

I don’t really consider any of the records in my collection to be a guilty pleasure – like most people, I suppose, I tend rather to think it is others who ought be ashamed if their tastes don’t align directly with my own. The difference being, of course, that I’m right – but I can understand why many people may not care for Party.

The sleeve says children’s party more than the Rock and Roll Party as described on one of the album’s opening tracks, and some would agree that’s probably this music’s correct audience. But while certainly this is the sound of Iggy Pop in somewhat awkward pursuit of commercial success – which in itself probably belies many of his own tenets – there are more than a handful of characteristically Iggy moments that continue to endear me to the record.

Who, for example, could truly dismiss a record that begins “Sooner or later, baby/I’m gonna squeeze you just like a tomato/Sooner or later, baby/I’ll probably peel you like some old potato”? If, perhaps, we take Party as a quirk of an album, rather than a failed attempt at a sell-out, it becomes easier to enjoy.

That’s not to mention the fact (and fact it surely is) there are simply some brilliant tunes on the album: Pumpin’ For Jill and Bang Bang, for example, which, were they to be released today, would surely not be short of air time.

Party is a widely unloved sibling in the Pop family – though by no means the only one – but I really like it, in which case so ought you.

Last summer - 45 years after Pink Floyd filmed in the ancient city's empty amphitheatre for their 1972 concert film - Gilmour returned to the site for two nights as part of his Rattle That Lock tour. This time to a 2000+ crowd, and perhaps some fortunate gladiator ghosts too.

The live album, which is coming to a store (or shopping site) near you on September 29th, will invariably reveal the shows' success as an aural spectacle. (Those after the full laser- and pyrotechnic-inclusive concert experience, however, might want to book themselves a ticket for the concert film's one-night theatrical release on 13th September, or pre-order the Blu-ray.)

Naturally, tracks from Gilmour's 2016 album - of which Today and 5 A.M. are clear peaks - are accompanied by his previous solo efforts and, yes, those inevitable Floyd fan favourites. Those who possess a recording of the band's 1971 'show' might want to compare performances of One Of These Days - the only song that featured in both setlists.

But having been fortunate enough to encounter the tour at the Royal Albert Hall I, for one, am most eager to hear the soporific tones of Fat Old Sun again.

View Live At Pompeii at Amazon