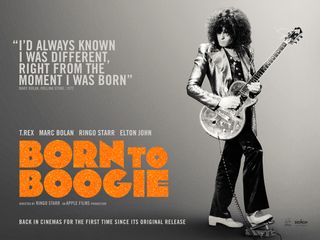 T. Rex strode confidently into the Teenage Sensation void that existed between the break-up of The Beatles and the start of David Bowie’s early-70s domination of Top of the Pops. At the fag-end of the 60s Marc Bolan, determined to reinvent himself and his band as a proto-glam outrage, ditched the acoustic hippy introspection and punishingly uncomfortable titles he’d dealt in as Tyrannosaurus Rex (random example: My People Were Fair and Had Sky in Their Hair... But Now They're Content to Wear Stars on Their Brows) in favour of direct, hooky and overtly randy rock/pop riffing.

It worked an absolute treat. Bolan realised where the real power lay – with teenage girls – and he pouted and strutted to heartthrob status. Never overly sophisticated, T. Rex nevertheless sounded almost exactly like snogging – and from Ride a White Swan (October 1970) to The Groover (June 1973), they hit the Top 10 of the singles chart 11 times in a row with some of the most exciting and enduring tunes of the era. And as befitted a mainstream Pop Star and authentic Teenage Sensation at that time, Marc Bolan and T. Rex made a film. A Motion Picture, in fact. It was called Born to Boogie.

Born to Boogie, directed and produced by Ringo Starr (who also gets a cameraman credit as Richard Starkey) and released by Apple Films (an arm of The Beatles’ Apple Corps) is, broadly speaking, a concert film. T. Rex played two shows at the Empire Pool, Wembley on 18th March 1972 – each to more than 10,000 people – and the film captures (most of) the evening performance. Interspersed are a couple of hair-raising studio performances (T. Rex joined by Elton John and Ringo Starr for a charge through Children of the Revolution and Little Richard’s Tutti Frutti at The Beatles’ studios on Savile Row) and some self-consciously odd sequences featuring poetry, face-paint, pretend nuns and John Lennon’s back garden. Painfully reminiscent of the catastrophic Magical Mystery Tour film of which Ringo was a big part, these sequences date the film terribly.

But while the concert footage is also easy to mark in time – the audience, all stack-heels and glitter make-up, scream and dance even as middle-aged, uniformed venue job’s-worths jostle and corral them – it’s only dated in the feather haircut/flared satin trousers sense. Musically T. Rex were a rum line-up at this point (Bolan, handling guitar and vocals, is joined by a percussionist, a drummer and a bassist, which makes for a shallow and occasionally rather thin sound) but the songs – Telegram Sam, Cosmic Dancer and Hot Love in particular – are copper-bottomed. Riffs the size of buses, choruses a football crowd could get behind and enough attitude to power a medium-sized town. Only during the eleven minutes-plus of Get It On, with its endless guitar frottage and general self-indulgence, do T. Rex show anything short of absolute understanding of what’s required. And throughout, when he’s not pouting or camping it up, Bolan is smiling all over his face.

The Born to Boogie reissue treatment is thorough. It started last month, with a limited-edition double-vinyl Record Store Day exclusive of both concerts. On 13th May there’s a limited-edition 7in single of the Children of the Revolution/Tutti Frutti sessions with Elton John. And on 13th June it’s the big reveal: a two-CD set of both concerts; a two-DVD/two-CD/hardback book package featuring documentaries, back-stage and unreleased footage, and 5.1 mixes by T. Rex and David Bowie producer Tony Visconti; a Blu-ray release with the original film in HD, a director’s ‘Premier’ cut, plus trailers, documentaries etc and so on. And the day after that, Born to Boogie gets a limited theatrical release at Picturehouse Cinemas.

The Blu-ray picture transfer is impressive. Born to Boogie was shot on 16mm film, and it’s a high-contrast, colourful affair (this being the early 70s, everyone in the auditorium is dressed up in the most startlingly ill-judged colour combinations, so it’s just as well the Blu-ray palette is up to the task). Picture noise is minimal, except in the aimless Mad Hatter’s Tea Party-style ‘dream-sequence’ vignettes, and there’s plenty of detail when the light catches the sequins or the constant cigarette smoke.

Audio-wise, there's a choice of DTS-HD Master Audio in either stereo or 5.1 mixes. The exterior shots sound muddy and cheap, but the concert footage is a much more visceral affair - there's a fine mix of audience hysteria, Gibson Les Paul crunch and character-packed vibrato vocal. It's not quite like being there - you'd need a good whiff of oestrogen and patchouli for the full experience - but it's a strong, dynamic suggestion of what it might have been like.

For fans, then, Born to Boogie is pretty much essential. For those curious about the brief star-burst of glam-rock, or even interested in what the teenage nation looked like forty-odd years ago, it's well worth investigating too. And thanks to Edsel and Demon Music, you can choose your format with confidence.