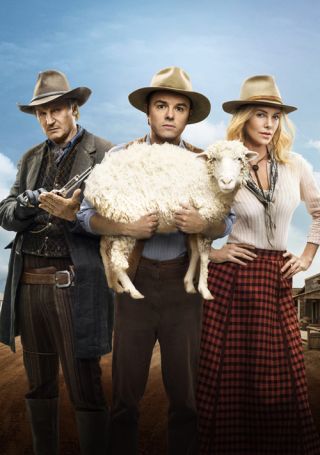 Seth MacFarlane has an odd sense of humour. That may be obvious to some, but stating it brings up a useful point with his latest film, A Million Ways to Die in the West. Much of what you get out of it will depend on whether you’re a fan of MacFarlane's brand of comedy.

It's rare to see a western in cinemas, rarer still to see a comedy western, but A Million Ways doesn’t make its idea – that the Old West is a death trap waiting for its next victim – particularly compelling in either genre.

A Million Ways tells the story of cowardly sheepherder Albert (MacFarlane) who meets Anna (Charlize Theron), a mysterious woman with a sketchy past whom he begins to fall for. However, he realises there's more to her than he initially thought when her husband, notorious gunslinger Clinch (Liam Neeson), comes looking for her.

A Million Ways’ story is its weakest part, with the plot taking a good while to kick in – and when it does splutter into life it's not especially engaging.

MacFarlane's direction and the editing lack urgency, the film apparently content to coast through the first two-thirds before placing its characters in peril for the last 20 minutes. For a comedy, a 116-minute run-time is pushing it.

So it's good that it has plenty of jokes in its armoury, even if the quality of some are suspect. MacFarlane doesn’t help in this regard with a tendency to prolong a joke to a point where it's past being funny, wringing all the laughs from a promising opening.

And while he's not one to shy away from risqué content, of which there is plenty, some of it feels out of place and from another time altogether.

The number of puerile jokes won't surprise anyone familiar with MacFarlane’s work either. It is the Wild West after all and A Million Ways plunders the era like a prospector digging for gold – except all it scrapes up is the muck and dirt.

You won't find many sophisticated jokes here (some are downright lazy) and if MacFarlane believes his audience enjoys scatological humour then he serves it up in droves.

But when a good, well-timed joke lands, then the film is undeniably funny, taking aim at prostitution, religion, living conditions and yes, even the photography of that time (did anyone smile in photographs?).

You'd be hard pressed to sit through the film without cracking a smile, whether it's the interaction between MacFarlane and Theron, visual gags, famous cameos or the supporting cast filling the void – Giovanni Ribisi, Sarah Silverman or Neil Patrick Harris's moustache-twirling baddie supplying the laughs.

In the end A Million Ways to Die in the West is an enjoyable enough watch even as it labours to fulfil the promise of its concept.

It looks beautiful, with picturesque views of the oft-used Monument Valley filling the landscape, and an enjoyable Western score by Joel McNeely. But we were hoping the premise would elicit more laughs than it did.

Not a clunker by any means, but not a rewarding comedy either.