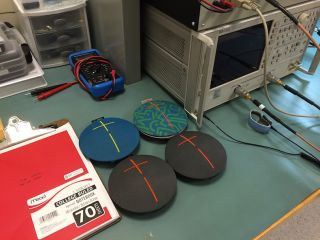 Just an hour's drive from the centre of Portland, the town of Camas is home to the engineers and product designers behind the Ultimate Ears brand of wireless Bluetooth speakers. Part of the Logitech empire which produces PC speakers, accessories and professional in-ear headphones, Ultimate Ears became a standalone brand in 2011 focused on creating a range of portable speakers for younger, more fashion conscious consumers.

First came the Miniboom, then the Boom, followed by the five-star UE Megaboom and now the newest member of the family, the disc-shaped Ultimate Ears Roll (below) which has just gone on sale for £100.

So why all the fuss about yet another addition to the burgeoning Bluetooth speaker market? Ultimate Ears likes to think it does things a bit differently, and being based on the USA's west coast, it's perhaps not surprising it has adopted an Apple-esque approach to product design. Doug Ebert, UE's product development manager for the Boom and Roll, used to design Logitech's iPod docks, so he knows a thing or two about how Apple operates (he was in charge of Logitech's Made for iPod program).

"A couple of years ago, we made a big design shift," says Doug. "We wanted to try new things, to focus on the right materials, the best acoustic components, distinctive packaging that sticks out on the shelf in store. We don't start with technical specs, we start with the 'essence' of the product, the essence of our customers. The UE Roll is designed to be the 'wild child' of the Boom."

Diego Gabathuler, global brand director for Ultimate Ears, chips in: "We design speakers for people, not for rooms. The idea is to allow people to take their music where it shouldn't go, which is why our speakers are shock and water resistant, and why we design them to deliver 360 degree sound."

Doug Ebert is keen to emphasise that the customer's experience of using a UE speaker must come first, before they worry about the scheduling and cost implications of building the product.

"That's why the large +/- volume buttons are such an iconic part of the design," he says.

So how did the new UE Roll come about? "We hired a product design agency in Palo Alto and they developed a couple of designs for us," says Doug. "As soon as we saw this one [the disc-shaped form used for the Roll] we went for it. The engineering team said they didn't know how to make sound out of such a shape, that it was inefficient, that we'd have to make it bigger. I refused to increase the size by even 1mm," he adds.

"Essentially, we are trying to get impossibly good sound out of an impossibly small speaker."

It's easy to understand why the engineers were so concerned. Once you've packed the PCB, battery, two tweeters and a driver into the casework of the UE Roll, there's barely any acoustic volume (ie space, or air) left inside the cabinet. In fact, one of the engineers told us that the amount of acoustic volume within the unit is equivalent to just six tablespoons.

Not a lot, in other words, and extremely difficult to make such a product sound good. In fact, the Roll has just one third of the acoustic volume of the Miniboom, which it replaces.

While the Ultimate Ears Boom and Megaboom both have full-range drivers, there simply wasn't enough room in the Roll to fit full-range drivers and a passive radiator. So instead it uses two tweeters and a woofer, which is a scaled-down driver from the Megaboom.

"The team in Camas has a great heritage in developing PC speakers, and we've used that to move away from PC/desktop to portable products under the Ultimate Ears brand," adds Patrick Nicolet, UE's VP for product development.

Other key objectives for the UE Roll project were to give it a wireless Bluetooth range of 65ft (up from 35ft on the Miniboom) and to make it IPx7 compliant so it could be submerged in 1m of water for up to 30 minutes. Oh, and it had to be "super robust" and have a simple attachment system - hence the bungee cord which can be used to hang it up or strap it to your bike.

To get the required nine-hour battery life on a full charge, UE turned to billionaire Elon Musk, the brains behind the Tesla electric car company. The UE Roll uses the same Lithium-ion battery technology as used in the Tesla Model S, but even that's not enough for the engineers apparently. "We still need more power and battery life," says Doug. "When it comes to battery technology, we need Elon Musk to pick it up a bit." That's him told then.

Another example of the attention to detail in UE's approach to product development is the fact that there are two small weights inside the Roll to ensure it sits perfectly flat when placed on a table. Without them, it apparently tilted six degrees and the designers weren't happy with that.

This forward thinking approach isn't limited to the product itself. Much thought went into the packaging too, which is 100 per cent recyclable. So far, so normal.

But there's more: UE hired an origami expert (yes really) to help develop the packaging from a single sheet of thick paper which is used to wrap the product as you might wrap meat from the butcher. Pull it apart and once you've taken the Roll out you'll find a simple, three-point guide printed on the back of the pack. Again, very Apple.

The company went through 15 different designs for the Roll's packaging, over a period of six months, before settling on the final version. This attention to detail is not something new. "If we had listened to people internally, we wouldn't have done the Boom packaging the way we did," says Doug. Making the UE range stand out on the shop shelf is clearly a key objective.

Of course there's much more to putting a product like the Roll on sale than just some fancy packaging. Once the engineering was done, the product had to be thoroughly tested.

For example, the fabric used to cover the front of the speaker was tested over 12 months by being left out in direct sunlight in the Arizona desert in scorching temperatures to see how much it faded.

And there are drop tests, water tests, cable bending tests and an environmental chamber in which the speakers can be chilled to -40˚C and heated up to 70˚C. There's even a machine for testing the 'feel' of the volume control buttons so the click action is just right.

Inside UE's R&D lab is one of the largest anechoic chambers on the west coast for measuring 360 degree sound, as well as a Bluetooth antenna measurement room for testing multiple types of smartphone and a separate acoustics lab where all driver design is done inhouse.

They even have a very expensive dummy called HATS (Head and Torso Simulator) for measuring and testing headphones. Six acoustic engineers work under the leadership of Matt Green, UE's acoustic manager, to tune all their own products.

When any product is being built and tuned, Green and his team do multiple blind listening tests in what they call the MOS (Mean Opinion Score) room. It's an acoustically treated test room designed to make the sound more diffuse and has an acoustically transparent curtain behind which competitor products can be placed, along with UE's own.

The line-up includes two 'anchor' or reference speakers, rated one and five respectively. Each speaker is then scored out of five, using those two reference points, by playing the same seven music tracks every time. "Quite simply, it helps us to design products that are better than our rivals," says Matt.

During our visit we conducted a blind test with four speakers and had to rate each one from behind the curtain. Halfway through the test, the speakers were rotated so they faced away from us, and the only variable we could adjust was the volume.

The curtain was removed and the products revealed: we'd been listening to the UE Roll, a Jambox Mini, Beats Pill and the Bose Soundlink Colour. Let's just say three of them performed well, while one was truly awful.

So what's next for Ultimate Ears? Well at CES 2015 in January the firm announced it was working on developing the multiroom streaming capabilities of its speakers, and we heard a demo of 10 UE Booms linked together, all playing the same piece of music around the room.

There's no exact launch date for that update yet, but we believe it's coming later this year. That will allow UE to compete in the highly competitive multiroom streaming speaker market. "It's much easier to be in the portable speaker market and move into the home, rather than vice versa," says Patrick Nicolet.

Further updates are in the pipeline. For now, the three-strong Ultimate Ears line-up (Boom, Megaboom and Roll - the Miniboom has been dropped) will fly the flag for the brand with the emphasis on "life resistant" design, upgradeability and the ability to "take your music anywhere it shouldn't go".

We will be publishing a review of the UE Roll in the September 2015 issue of the magazine, on sale from 5th August.