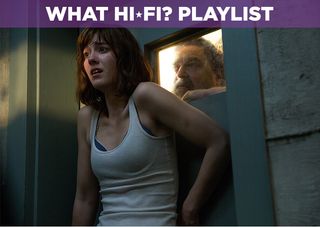 All is not what it seems in Dan Trachtenberg's directorial debut 10 Cloverfield Lane.

Part horror, part mystery and with lashes of suspense, 10 Cloverfield Lane keeps the audience guessing until the film's climax thanks to a trio of top performances and an intriguing set-up straight from the drawer of producer J.J. Abrams.

In an opening that echoes Hitchcock's Psycho, Michelle (Mary Elizabeth Winstead) leaves her boyfriend and San Francisco apartment in a rush, heading inland before getting involved in a car accident.

Waking up days later, injured and chained to a wall in a underground bunker, she discovers she was brought there by Howard (John Goodman), who tells her that the outside world has been hit by a chemical attack. Her only means of survival is to bide her time in the bunker with Howard and fellow survivor Emmett (John Gallagher Jr).

Despite the title 10 Cloverfield Lane shares little DNA with the original Cloverfield. Whereas that film followed a group of characters through the streets of New York, 10 Cloverfield Lane is a claustrophobic film, with most of the action taking place in the bunker. Where Cloverfield had an monster of unknown origin as the enemy, the threat is harder to pin down in this pseudo-sequel.

MORE: Watch trailers for the biggest new films coming in 2016

Goodman's Howard is your typical end-of-the-world conspiracy nut, but his alarmist views may contain a grain of truth. Howard has good intentions, but is also menacing and creepy. One of the film's strengths is its ability to keep shifting your stance on whether he's good or not.

With an ongoing debate about women in film, Winstead's Michelle is capable and resourceful, and definitely not a damsel in distress. Gallagher Jr's Emmett provides a few laughs, but also shares some poignant moments with Winstead. It's sterling work all round.

It's a handsome looking picture with plenty of detail (pick out the hairs in Howard's beard), but considering that the film takes place in a bunker, there's little that is truly arresting or pops out.

The soundtrack really grabs the attention though. Whether it's the sound dropping out, the introduction of a ringing sound that underscores a tense conversation, or your usual horror scares, the Dolby TrueHD track is both subtle and expressive, especially in the latter part of the film when the decibels are ratcheted up. Also included is a Dolby Atmos soundtrack.

Like its "blood relative", 10 Cloverfield Lane is an effective thrilller that holds plenty of surprises.

Aping the films of Hitchcock and Spielberg, its best you go in knowing as little as possible, except that you're getting fantastic performances and a very good A/V experience.

Goodman is excellent, as is Winstead who anchors one of 2016's better films. It's a very welcome surprise and a confident first film from Dan Trachtenberg.