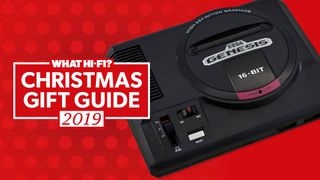 Gamers are a hard bunch to please. Perhaps hardened by the unforgiving nature of the online battlefield, or maybe spoiled by the sheer quality of modern-day consoles and games - either way, a gift for a gamer needs to be carefully chosen.

But help is at hand. We've searched high and low for presents to put a smile on the face of the most hardcore player, particularly if they have a penchant for superior pictures or sound...

These may not be the very best headphones available for £100, but there are no better headphones for gamers, particularly (but not exclusively) PlayStation gamers. They connect wirelessly to a PS4 (or PC) via USB dongle, are comfortable, have an invisible mic for in-game chat, have great range and clarity, and sound punchy and spacious.

You can download game-specific sonic profiles to get a tailored experience for the likes of Uncharted 4, and even dedicated 3D Audio for some of these games. Virtual Surround Sound (VSS) is available for those game that don't have 3D Audio, although we'd stick to stereo for those.

All told, this is the perfect gift for your PlayStation-playing pal.

Want the gamer in your life to make a little less noise? This very affordable gaming headset can be plugged directly into a Nintendo Switch or into the controller of a PS4 or Xbox One.

Not only do they sound great for the money, they get you the peace and quiet you deserve. At least until your loved one starts using the integrated microphone to yell obscenities at their online enemies...

Games are all about immersion and video is only half of the battle. Who wouldn't want surround sound to complement the on-screen action?

So the gamer in your life will be tickled pink to unwrap this superb soundbar, which simulates surround-sound without the need for lots of extra speakers.

The new, portable-only version of the brilliant Nintendo Switch is an absolute joy to use and very good value at under £200.

If you fancy getting the lounge TV back out of the clutches of the gamer in your family this Christmas, the Switch Lite is an excellent option.

If your loved one is a PlayStation 4 or Xbox One gamer and they don't already have Call of Duty: Modern Warfare, you need to buy it for them - as long as they're also older than 18.

A real return to form for the series, Modern Warfare contains an excellent bombastic single-player experience with the most tactical multiplayer deathmatches in years. It also looks and sounds astounding, particularly on Xbox One X and PS4 Pro.

Games take up a lot of storage space, especially in 4K, so your Xbox or PlayStation hard drive could fill mighty quickly. Time to give your game-loving friend a storage-expanding external disk, such as this Seagate.

It draws power via USB so doesn’t need its own mains connection, and adds tonnes of extra space. You can even go up to 4TB if your recipient is a true hoarder.

If your gaming giftee is more concerned with performance than capacity, they'll be extremely grateful to receive a solid state drive (SSD) this Christmas.

Both the Xbox One and PS4 have existing hard drives that can easily be removed and replaced, and an SSD will boost install and loading times. And what greater gift could you give than time?!

This stocking-filler is a fantastic way to expand the capabilities of an Xbox One. Once plugged in and connected to an aerial, the Xbox is essentially turned into a Freeview HD PVR, making it possible to bookend an episode of Doctor Who with sessions on Call Of Duty. Even Humax can’t match that.

Unless you're extremely rich and generous, this is an expensive gift. However, if you're treating the whole family to a new TV this Christmas and gaming is a priority, no other option is as bright, as vibrant or as responsive as a Samsung QLED.

Switch on Game Mode and input lag is as low as any TV will currently go, and its pin-sharp detail makes it great for games – especially those from an Xbox One X or PlayStation 4 Pro. It also comes in a 65in version, should you need something on the even bigger side.

While we're undeniably nerdy about things like 4K and HDR, we're far from immune to a tug on the nostalgia glands - which is why we love the Sega Mega Drive Mini.

Sega's a bit late to this mini console fad, but it's packed this insanely cute miniature replica of the Mega Drive with 40 of the very best games from the console's heyday. It also comes with two controllers and an HDMI cable so you can connect it to your modern TV.

This is a brilliant trip down memory lane for any ageing gamer, and it's a great way to introduce kids to the more innocent times of gaming past.