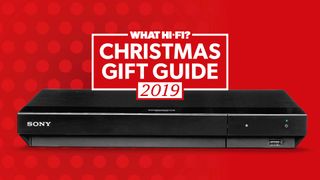 2019: the year of Avengers: End Game, the finale to the Skywalker Saga, and some pretty juicy James Bond banter. The movie buff in your life must be elated. So why not heighten their euphoria on Christmas day with the presentation of a super-fun film gift?

We've curated a list of film-related present ideas – from home cinema equipment and 4K Blu-rays to movie memberships, film art and card games – that are perfect for anyone who's mad about the movies.

Like one of these gift ideas so much you want it for yourself? Go on, chuck it on your Christmas wish list – we're not judging.

While we'd give special mentions to the 4K Blu-ray transfers of Avengers: End Game, Apocalypse Now: Final Cut and even, purely based on theatrical viewing, the upcoming Once Upon A Time In Hollywood release, Christopher Nolan's restoration (or, as he puts it, "unrestored" version) of Stanley Kubrick's spacey masterpiece gets our pick for the best 4K Blu-ray released in the last twelve months.

Sit any Kubrick aficionado down with this Warner Home Video release and watch them in awe as they scrutinise this AV masterclass.

Feeling generous enough to furnish the living room of the film lover in your life with a brand spanking new telly? If they have the space for a 58in TV, this is the one we'd recommend. A 2019 What Hi-Fi? Award winner, this Pana promises a detailed, natural performance that, thanks to Dolby Vision and HDR10+ support, is able to make the most of the premium HDR formats found the increasing number of 4K Blu-rays and streaming service titles.

And it's now even better value thanks to a discount...

Give someone the gift of a new film every day of the year thanks to this one-year subscription to MUBI. (That's 365 films for £95.88).

With titles that stray sideways from the mainstream market – think more Jean Luc Goddard than J.J. Abrams – it's an appealingly fresh way to watch movies you otherwise might have missed. MUBI Go is part of the parcel too, giving subscribers a free cinema ticket for its choice of film every week in participating theatres.

It wouldn't be Christmas without turkey, trivia... and tears as people argue about trivia. This movie card game is the ideal after-dinner entertainment, and will suss out those who cares way too much about the minutiae of movies and those who haven't seen that famous film everyone else in the world has. Outrageous.

There are plenty of game variations you can play, and the artwork alone deserves applause.

What better way to flaunt your (or your loved one's) love of the silver screen by proudly displaying some framed artwork of some awesome flicks.

Not everyone can deck out their living room with a 5.1 speaker package or knock Dolby Atmos speakers into the ceiling. And not many of even the most generous gifters could afford such a set-up, anyway.

But a budget soundbase that is not only a current What Hi-Fi? Award winner but also heavily discounted seems much more reasonable. Plonk a TV on top of the Q Acoustics M2, and any movie-watching experience will be lifted thanks to its expressive sound.

So, if you know someone who's getting their film fix through their TV's speakers, then shame on them – but also, this is your chance to do them a massive favour.

Gifting a monthly mag subscription benefits both the gifter and the giftee. After all, you get year-round satisfaction that your one-time purchase is a long-lasting present, and they get to be gifted with an hour or two's entertainment every month.

And anyway, what film fan wouldn't like to be gifted the best film magazine on the planet all year round? For just £30, you can buy an annual subscription to Total Film, for yourself or for someone else, that delivers 13 issues straight to your (or their) door throughout the year. That works out as just £2.31 a mag.

You can subscribe or buy the latest issue here.

"Simply the best video streamer after the Apple TV – and it's over £100 cheaper" is our verdict of the Amazon Fire TV Stick 4K. If you know someone with a 4K TV, this neat, and What Hi-Fi? Award-winning, device may just make the receiver squeal as they open it.

The dinky device simply plugs into a 4K TV's HDMI input to furnish it with 4K streaming, support for every major HDR format (HDR10, HDR10+, Dolby Vision and HLG), all with the Alexa voice-activated personal assistant. Amazon Prime Video comes as standard (of course), alongside Netflix, the terrestrial catch-up services (BBC iPlayer, ITV Hub, All 4 and My5), and the bonus of music services Spotify, Deezer and Tidal.