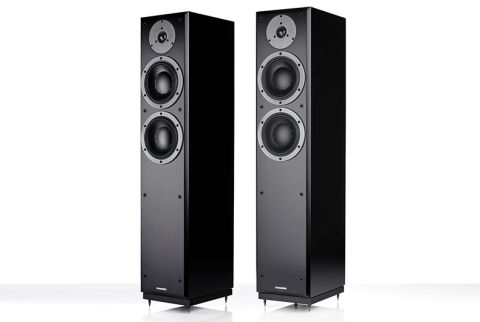 Dynaudio’s Emit M30s have a lot to live up to.

The standmounter version of this speaker, the M20, is our newly-crowned speaker Product of the Year, so the addition of a larger cabinet and extra bass driver can only be a good thing, right?

Despite costing well over a grand, these are the cheapest floorstanders Dynaudio currently makes. The company has never done budget, and it looks like it’s not about to start now.

The distinctive drive units are in-house designs, carefully honed over years of development.

We are big fans of the company’s 28mm dome tweeter – in previous tests of Emit speakers we’ve found it tends to combine refinement with bite better than most.

Here it’s partnered with pair of the company’s distinctive 17cm mid/bass drivers in a two-way configuration.

That large dome in the middle of the cone isn’t just there to look good; it also helps to add rigidity to the magnesium silicate polymer diaphragm. These drive units also use much larger voice coils than is normal.

The one used here is 75mm in diameter – more than double the conventional size. The advantages are claimed to be improved efficiency and a reduction of heat build up. In short you can play louder for longer.

Dynaudio has never been a fan of biwiring, believing it doesn’t offer any tangible sonic benefits, so it’s no surprise to find the M30s equipped for single wiring only.

After all the engineering involved in the drive units, the cabinets could be seen as ordinary in comparison.

Solid MDF boxes standing 96cm high and a bit over 20cm wide, the finish is smart without being spectacular, though we like the speaker’s sparse, almost plain attitude towards decoration.

As if to emphasize this puritanical streak, Dynaudio offers just two finishes – black and white.

There’s little to enthuse an interior designer here, but they’re neat enough and will blend into most environments without issue.

One thing to take note of is that these speakers have a relatively narrow footprint and because of their height are pretty easy to knock over. Take care if you have small children or pets.

Those doubled-up mid/bass drivers mean that these speakers generate a pleasing amount of low-end authority. Once the spikes are properly adjusted and tight, basslines are delivered with power and purpose.

Listen to Bob Marley’s Exodus and the low-end comes through with authority and agility. There’s a good level of detail here with the speakers revealing a fine degree of subtlety and texture.

Marley’s vocals brim with passion; the fine integration between the tweeter and mid/basses generating a midrange of pleasing clarity and insight. The top-end proves equally talented.

That tweeter continues to serve well with its combination of attack and insight.

Moving to Tchaikovsky’s 1812 Overture shows the M30s’ ability to deliver wide-ranging dynamics from low-level instrumental nuances right the way through to the kind of explosive crescendos that rattle your furniture. The stereo imaging is decent too, delivering a fair dose of scale and stability.

Other plus points include a relatively even tonal balance, an ability to deliver high volume levels with composure and good refinement. Put it all together and it’s hard not to admire these speakers.

But there’s something missing. It’s a sense of enthusiasm – a quality that the junior speakers in the range have with abundance.

Play upbeat music such as Ryan and Macklemore’s Thrift Shop and these Emits – unlike others we’ve heard in the range – sound a little safe, lacking the sparkle needed to bring the music to life.

Blame a shortfall of rhythmic drive and precision coupled to a lack of punch.

It all adds up to a competent and capable pair of speakers, but not necessarily ones that have us rushing home to get a fresh musical fix every evening.

By Dynaudio’s current sky-high standards, that’s something of a surprise.