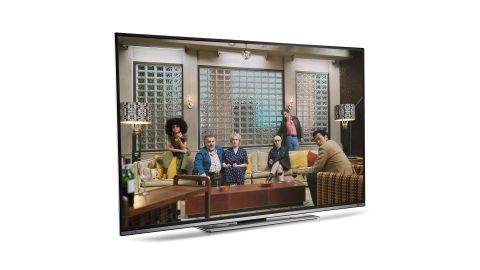 The price may be right but this TV is not. Buy smaller or spend more

Size isn’t everything, they say, but it still matters. A bigger picture can be more engrossing, more cinematic and certainly a lot easier to see in a large room. For that reason, those on a budget may well feel a frisson of excitement when the Toshiba 55UL7A63DB pops up in their searches. With a name you’ll recognise and boasting 4K, HDR and Dolby Vision support, this is one of the cheapest 55in TVs you’ll find.

Read the spec sheet and things get even better – a built-in sound system tuned by Onkyo engineers, catch-up apps via Freeview Play and voice control through Toshiba’s plug-in microphone. There’s little else one could really hope for. Or at least that's how it might seem...

The cost savings on the Toshiba 55UL7A63DB are not apparent from the outside. Given the price, this is a good-looking, slimline set. The edge-lit LED design means it is just 58mm thick up and down its profile. There are no bits and pieces sticking out at the back, which makes it both easy on the eye and good for wall-mounting.

Its two USBs are recessed into the side, along with one of the four HDMI ports. The remaining three, one of which supports ARC, are on the rear along with the ethernet, antenna and optical.

On the front face, the bezel is as thin as you could hope for at this level at 15mm around three sides. The bottom edge has an extra 10mm of chrome-look brushed metal that blends nicely with the rectangular plinth just a short distance below. There’s no gap for a soundbar to sit at its feet.

There are two matching brushed chrome-look remote controls – one is fuller, with a number pad and compatible player controls, and the other is two-thirds of the size. Both are fitted with shortcuts to Netflix and the Freeview Play smart platform and, like the TV itself, they look and feel rather good.

Freeview Play adds the assurance of an easy to use interface, a solid TV guide and a full suite of catch-up services, though a fair few other apps - such as BT Sport, Now TV, Spotify, Tidal and Apple TV - are missing. Deezer and TuneIn are the music services included, and the likes of YouTube, Rakuten, Amazon Prime Video, Chili and Britbox are all here too.

The user interface is occasionally a little slow to load, particularly when using the EPG, and stutters a fair bit when browsing the menus. Toshiba’s choice of the dual-core processor at the heart of this set may not have been the best option.

Should you wish to voice control this Toshiba TV, you can spend an extra £30 and a far-field Alexa mic will be packaged in with the telly. Plug it into one of the USB ports of the 55UL7A63DB and you can use your voice to change the volume, switch live TV channels or turn the TV on and off. It works, but we soon revert to more traditional methods once the novelty wears off and so don't deem the extra expense on the add-on as being particularly worthwhile.

We start our viewing with a disc of Captain Marvel in 4K HDR, but as soon as the screen turns black we hit problems. This is a cheap, edge-lit TV and we’re not altogether surprised to see some leakage of the backlight at the sides of the picture. It's not the worst we've seen, but a fair amount of light bleeds into the display from the corners, particularly the bottom-left of of our sample. There's some noticeable patchiness in other areas of the screen during dark scenes, too.

The viewing angles are perhaps a bigger issue. Just a small movement off axis in any direction and the intensity of the picture fades rapidly. Sat around 1.5m away, we can even see the off-axis effect at the corners of the screen. This is worth bearing in mind for anyone buying this as a family TV. Thankfully, once the film kicks in, the fading is not terribly apparent in most of the scenes and, again, because it’s fairly consistent, even in the darker moments, it’s tolerable.

There’s a good wide shot as Carol Danvers and Nick Fury drive down a scrub-lined desert road to the US Air Force base. The colours are balanced and reasonably natural. The sky is a bright, appealing blue, the plants are a convincing green and the rocky canyons have a healthy pinkish-red tinge.

HDR is also handled well for a budget TV. The stark contrast between the shadows of the canyon and the harsh, sunlit areas are neither too overblown nor too dark and there’s enough texture to the stones on the slopes to add a reasonable sense of depth to the image.

Naturally, the picture falls down some in darker scenes. During the stand-off inside Maria Rambeau’s low lit Louisiana home, there's little to no detail to Talos’s purple jacket. Is it wool? Is it cotton? Is it some kind of space fabric? Who knows but, to be fair, it doesn’t spoil our enjoyment of the film either. In fact, if that were as far as the problems went, then we’d be quite pleased with this Toshiba TV.

The biggest issue is that this panel just can’t handle movement. It offers good 4K detail when the picture is still, but even small actions such as characters moving their heads causes blurring. It’s incredibly off-putting and the motion processing technology does little to improve it.

During the night-time away mission scene, the lack of dark details and the motion problems combine to catastrophic effect. The fighting becomes a smear of arms and legs lit up by the odd laser blast that comes from places too hard to decipher. Even in well lit scenes, this Toshiba TV struggles to hang onto any detail when there are small movements.

The blurring is not quite as bad as we drop down in resolution to watch an upscaled version of First Man in Full HD on Blu-ray. Colour handling is still consistent and dark details are certainly no worse than before. In fact, all things considered, this TV’s scaling chops are not bad at all.

During the heart-wrenching scene where Armstrong has to explain the details and dangers of his upcoming Apollo 11 mission to his family, we get some credible details on their faces. There’s still smearing, but with less detail on show, it’s not quite as noticeable.

But we do have some issues with noise in the picture. This is not an easy film to upscale. It has a purposefully grainy look to evoke a 1960s aesthetic and it takes a fair amount of work to stop that grain from dancing about. With out-of-the-box settings, the effect is quite unbearable. The noise filters do a reasonable job of smoothing it out, but the trade-off is that they make the smudging effect worse.

We drop down further to some standard-def daytime TV with Shakespeare & Hathaway: Private Investigators. The blurring is still present and the detail is understandably wanting, but that’s what we’d expect at this price.

The only real problem is that the colour balance has gone. The brighter shades peak too much and Shakespeare’s blue and pink cardigans are way over the top. We’re relieved when the pair catch the killers and we can finally switch off.

Fortunately, this TV is not as shabby for sound. Toshiba has used Onkyo to tune its speaker system of two down-firing drivers plus a sub, powered by a total of 42W of amplification. It supports both Dolby and DTS audio codecs and there are plenty of options in the sound menus to tailor the audio to your tastes.

The Automatic Volume Levelling feature is effective and the sound profiles – Music, Movie, Speech, Classic and Flat – are all usable. We mostly stick with Movie and are pleased with an even distribution of audio across the range.

There’s a decent balance between the voices, music and effects in every scene. We still pick up all of Brie Larson’s cheeky one-liners in the fight towards the end of the film, even in the midst of all the crash-bangs and laser blasts.

There’s little weight to speak of and no real dynamism either, no matter what audio preferences you use, but that’s difficult to find in a budget TV. For that, we’d usually recommend a soundbar.

What is more encouraging, is that this TV has a good stab at creating a soundstage. It’s not all centred around the panel itself. We close our eyes and there’s a definite sense of the direction of travel as Captain Marvel flies about smashing through Kree spacecraft.

It won’t make you duck down in your seat and you’ll never feel a rumble with the on-screen explosions, but we’re pleased with what Toshiba and Onkyo have done here.

While Toshiba has spent money on this TV’s features, it feels like the core investments have gone missing. We’d guess that this is a cheap panel with a cheap processor and the result is a picture that struggles to keep up with the source material at full resolution.

Mercifully, the sound quality and its ability with lower res content lift this set into the realms of just about acceptable. All the same, we feel this is more like £369 wasted than another £70 saved over the equivalent Samsung or Panasonic.

The best advice here is to spend a little more or choose a smaller panel.