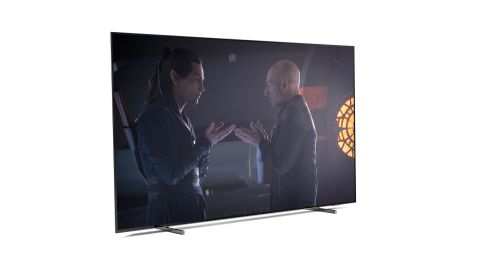 Simply put, this is one of the best TVs you can currently buy

The OLED804 should be one of the best TVs you can currently buy, however, we’ve already reviewed it in its 55in guise and deemed it good, but short of spectacular.

According to Philips, though, that sample was rushed out so that it could be considered for our 2019 Awards and wasn’t representative of the final retail product. The OLED804 should, in fact, perform in picture terms just as well as the recently reviewed and brilliant OLED984.

That might sound like a classic case of a manufacturer attributing a less than perfect review to a below par sample, but in the case of the OLED804, it appears to be an accurate assessment. That’s because the 65OLED804 really is as good as the OLED984 in terms of its picture, and therefore is one of the best TVs you can currently buy.

While some manufacturers opt to go super-stylish with their TV designs (LG) and others for functional (Panasonic), Philips treads a happy middle ground. The OLED804 is a TV that, thanks to exceptionally thin bezels and dainty, low-profile feet, lets the screen shine, but its subtle silver flourishes add desirability and reduce utilitarianism.

It also has Ambilight built in, so the on screen action is extended onto the wall around the TV in the form of coloured light. This adds a little bit of bulk to the rear of the set – the Philips is barely any deeper than the equivalent LG C9, but its rear enclosure covers more surface area - but the benefits in terms of visual drama are obvious.

Philips’s own picture quality rating system pegs this OLED804 at 5000ppi (Picture Performance Index) and the OLED984 at 5100ppi, but that extra 100ppi represents only an additional, bottom-edge Ambilight strip on the 984 – the 804 has light strips only along its sides and top edge, not that it makes much of a difference, particularly if you’re not wall mounting.

The panel used here is the LG-sourced 4K OLED seen in almost every 2019 OLED TV, with Philips relying (as its rivals do) on its picture processing to differentiate the performance. To that effect, the P5 Pro Perfect Picture Engine sits at the core of the set and powers the various picture enhancement technologies.

The operating system is once again Google Android TV, here on version 9.0. It's broadly a decent OS, but its implementation here is a little disjointed and feels as though it has been bolted on to Philips’s own menu system. That’s not a huge problem, but it does mean that the Philips doesn’t offer the same level of slickness as a Samsung or LG.

The app selection is good, though. Now TV and Apple TV are missing, but the likes of Netflix, Amazon Prime Video, Google Play Movies & TV, Plex, Spotify and Tidal are all on board. And while there has been some confusion about the long-term availability of the UK’s core catch-up apps (BBC iPlayer, ITV Hub, All 4 and My5) on Philips TVs, the recently inked deal between Freeview Play and Google ensures that they are now here to stay.

The OLED804 has a fairly typical selection of physical connections, including four HDMIs, two USBs, an optical audio output, dedicated headphone socket, and a component connection for legacy sources. There are aerial and satellite sockets, although the lack of a Freesat tuner means the latter are of little use in the UK.

It’s also worth pointing out that the HDMI sockets are not HDMI 2.1-certified. That’s not unusual, but many brands have introduced 2.1 features such as VRR (Variable Refresh Rate) and eARC (Enhanced Audio Return Channel) to their 2.0 sockets and Philips hasn’t. LG, meanwhile, offers full HDMI 2.1 connections on all of its OLEDs from 2019 onwards.

On the other hand, Philips (like Panasonic) supports HDR10+ and Dolby Vision (as well as standard HDR10 and HLG) on its sets, while LG continues to ignore HDR10+ and Samsung adopts the same position with regards to Dolby Vision.

Philips says the OLED804 should perform just as the OLED984 in terms of picture quality, and that turns out to be the case. There are tiny differences in terms of colour balance, but those are of the sort that we’d expect to see between samples of the same TV.

We kick off with the 4K Blu-ray of BBC nature programme Seven Worlds, One Planet, and the first scene is stunning: a fabulous orange-red sky on the right that gradually fades to pale blue on the left; ash-coloured mountains that are sharply edged and subtly shaded; and crisp white waves rolling onto the dark sand beach.

David Attenborough’s red coat and white hair stand out from the distant scene as he ambles along the beach and the sun reflected on the surface of the water is a particular joy.

In close-up, Attenborough is rendered superbly. Wrinkled, liver-spotted and as inspiring as ever, the flushing of his cheeks instantly illustrates the combination of cold, biting air and the exertion of the trek along the beach. It’s a delightful image.

We switch to the technically fascinating (but awful) Gemini Man on 4K Blu-ray, and there’s yet more to write home about. The Cartagena scene looks stunning: brilliant colours, from the burnt yellow of the house from which Will Smith first emerges, to the bright, royal blue of the 4x4 outside.

The pastel hues of some of the other buildings are subtly recreated, while the red sparks from the grenade pop from the screen just as they should. The black performance is excellent too, with the inky blacks you expect from an OLED, but also  bags of detail.

We turn off the processing altogether in order to avoid the distracting shimmer, but the trade-off is a fair amount of blur and judder. Almost all TVs force you to pick your poison when it comes to motion (some Sonys being the exception) but the Philips is a little more compromised than most.

On the subject of settings, none of the picture presets are perfect, so a little tweaking is necessary. Either start with Standard and pump it up a bit, or with Vivid and turn it down a few notches. For HDR, we go with Vivid and drop the Colour down to the high 50s, switch off the Light Sensor, both Noise Reduction options and Motion Styles.

When you drop to SDR (standard dynamic range) content, we stick with Vivid, but also switch off Perfect Natural Reality and Perfect Contrast, as these exaggerate content to noticeably artificial degrees.

Crucially, our settings don’t rob the Philips of all of its punch – 1080p films and standard-def TV signals still pop from the screen more than they do when viewed on most rival OLEDs – but there’s also a more natural balance and greater subtlety in colours and bright highlights.

The upscaling is good, too. Standard-def signals are predictably fuzzy but are perfectly watchable and 1080p content is solid, crisp and detailed.

The OLED804 obviously sounds far less accomplished than the vastly more expensive OLED984 and its B&W soundbar, but compared to similarly priced rivals, it is surprisingly capable.

We opt for the Original setting, which offers the most authentic balance, and the delivery offers good detail and clear dialogue, even when there’s a lot going on. There’s good, natural weight and even decent dynamics, at least for a TV.

You should, of course, match the TV to a dedicated sound system, but if that’s not possible, the Philips puts in a much better audio performance than most TVs of its price. It's a noticeable step up on the LG C9 and Samsung Q90, for example.

Philips assured us that the OLED804 should offer the same picture performance as the awesome (and expensive) OLED984, and that proves to be the case. That makes this one of the sharpest, punchiest and most detailed TVs you can currently buy.

Add that lovely Ambilight technology and an accomplished audio performance for the money, and you have one of the best performance-per-pound TVs around.