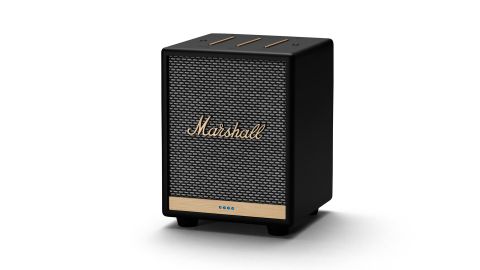 Marshall's Uxbridge Voice is a well-built, feature-led multi-room speaker, but sadly the audio is mediocre at best

The Marshall Uxbridge Voice is the smallest speaker in the British guitar amp company’s line of voice-enabled, multi-room speakers. The version we have on test here supports Amazon Alexa, but an otherwise identical Google Assistant version is also on the way.

The Uxbridge Voice with Alexa is named after a significant part of Marshall’s history. It was in a shop on Uxbridge Road in the west London suburb of Hanwell where Jim Marshall sold his first guitar amp.

Over 50 years later, that unmistakable guitar amp shape has been reduced in size, bringing some kind of retro style to the wireless speaker. On appearances alone, the Uxbridge should have a bigger and better voice than the Amazon Echo, but this is a competitive space and it will need more than good looks and some extra grunt to turn heads away from well-established rivals such as Sonos and Audio Pro.

If you like the Marshall look, you’ll love the Uxbridge Voice. It looks every bit of its not inconsiderable price tag, with the classic Marshall salt and pepper front and four sturdy rubber feet to keep it stable.

It’s nice and weighty too. Combined with a low centre of gravity, you’re unlikely to knock it off your kitchen worktop. Our one gripe here is that the matte black plastic around the 13cm tall box doesn’t feel quite as premium as it looks.

The top surface is fitted with all the hard controls. There’s a small toggle mute switch, a pause/play/skip button and three tasty brass rockers for volume, bass and treble controls. It’s also where you’ll find the dual far-field microphones.

There are no ports apart from the power socket, so there’s no possibility of listening through wired headphones, nor any kind of other physical connection. So, it’s Bluetooth or wi-fi only, with a small pairing button positioned on the rear.

There’s a dedicated app for this device, although you’ll probably only use the Marshall Voice software for set-up and for the odd firmware update. The in-app EQ is a little more granular than the rockers and features a few different profiles to try out, including Rock, Pop, Metal and Hip-Hop, but you'll otherwise do all of your interacting with the speaker via Alexa or the app for your chosen music service.

The Uxbridge Voice is AirPlay 2-compatible. Only through Apple’s system can you put it into a multi-room set-up, making it feel more like a glorified Amazon Echo Plus than a genuine rival to the Sonos One. Thanks to Chromecast, the forthcoming Google Assistant variant could feel more fully-featured, but it’s still worth considering the similarly priced Sonos speaker.

Like an Amazon Echo, the Uxbridge Voice has Spotify Connect built-in, but the biggest feature is undoubtedly Alexa integration. You can communicate with this speaker the same as you can with any Echo, although we do find the Uxbridge is slower to respond to the wake command. It’s perhaps only a second or so longer compared with an Echo or a Sonos One, but it’s frustrating having to wait for it to respond.

Similarly, it doesn’t process commands quite as well. We often find ourselves having to be specific, telling Alexa exactly what she needs to stop doing, for example, ‘stop alarm’ or ‘stop playing music’ instead of just ‘stop’. However, the implementation of Alexa should be improved with future ongoing updates to the Uxbridge firmware.

The four small LEDs at the bottom of the front face mimic the lights on top of an Echo device and offer a little more besides. As well as indicating when Alexa is actively listening and flashing yellow when you have a notification, they also indicate levels of volume, bass and treble so that you don’t lose your grip on the EQ when playing around with the brass rockers – simple but definitely effective.

Marshall hasn’t released the precise driver specs of the Uxbridge Voice, other than saying the woofer and tweeter are driven by a single 30W internal Class D amplifier. The box certainly offers plenty of space for a decent-sized cone compared to an Amazon Echo.

Hell’s Bells by AC/DC seems an appropriate choice for this rock-inspired speaker and it’s clear from the opening bongs that there’s more enthusiasm and drive here than from the average wireless speaker. Unfortunately, while each note initially snaps nicely, it's rather lacking in follow-through, with little in the way of substance and solidity.

The Marshall hints at deep bass but doesn't really deliver it, with everything sounding a little thin and lacking meat. As the track builds, we could really use a lot more of the pulse to underpin Brian Johnson’s screechy vocals and the brightness of the cymbals and snares. Fortunately, the treble stops short of anything harsh at normal volumes, but it does distort somewhat when pushed louder. This won’t be the best choice of device for a busy listening space.

There’s plenty of scope to adjust the balance with a twiddle of the in-app EQ but, whichever way we go there’s no making up for the shortfall of true bass. We try the preset EQ profiles, and while most are well chosen, Pop makes everything a little too fuzzy. We flit between a custom setting and the Flat option during our listening but wonder whether switching EQ profiles for each track is realistic for a small wireless speaker like this. An auto EQ selection mode would be a good option for future updates.

Once in full swing, the Uxbridge Voice manages to keep up with the music, although instruments begin to merge into one sound rather than existing in their own separate spaces. It’s not the most agile speaker you’ll find at this price and there are definitely more enjoyable ways to hear this song.

We switch to John Barry’s The John Dunbar Theme from Dances With Wolves for a sense of scale. The Uxbridge Voice has a crack at that and isn't bad at delivering the volume shifts required but, without the weight that comes with proper bass extension, there's a lack of heart-swelling drama.

During the second half, which represents Dunbar’s call to the wild and the wild calling back, the notes lack complexity and depth, and the Uxbridge Voice isn’t talented enough to handle the instruments’ interweaving.

It’s a pity because there is a reasonable level of detail compared to the five-star products at this price, such as the Sonos One. It picks up the more delicate refrains in the easier-going section part of The John Dunbar Theme. It’s only when the sound production gets more muddled that some of this slips away.

This is a decent effort from Marshall, but the Uxbridge Voice falls too short on audio quality to be able to wholeheartedly recommend it. It’s a long way short of the best multi-room speakers in terms of features, too.

Unless you’re already invested in Marshall’s other multi-room speakers or looking for a gift for the roadie in your life, then you’ll find better and more room-filling wireless speakers for the price.