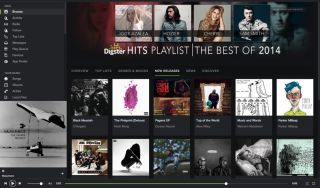 And we start the latest Wrap [14th January] with a double bill from streaming service Spotify, which revealed that most of our listening is now done on a mobile device.

According to TechCrunch, it was confirmed that 52 per cent of music streamed through Spotify now takes place using either a smartphone or a tablet – compared with 45 per cent that is streamed via its desktop software.

The news comes as the service declared that it had now reached 15 million subscribers worldwide – as well as 60 million active users. It marks yet further growth for Spotify, despite the launch of new services promising higher quality tracks.

Next up is the launch of a brand-new wearable device from Virgin Media that has seen the TV and broadband provider team up with students from Manchester Creative Studio – a part of its 'Switched on Futures' initiative.

KipstR is a device that helps you keep up to date with your favourite TV shows by setting your TiVo box to record what you're watching should you happen to nod off. It does this by using what's called a pulse-oximeter to sense if you're dozing.

MORE: Read all our Virgin Media reviews and news

Style Jukebox – the cloud-based music app that provides a "permanent and secure place to store your digital music collection" – has introduced the launch of its latest features in the form of its new Web Player and updated iPhone app.

The new Web Player aims to offer a simple way to listen, sort and upload your music to the service, opening it up to more users – plus improving the experience for existing users. Meanwhile, there's a new design and features for its iPhone app.

PS Now to get PS1 and PS2 games

Not content with launching a new subscription model for video game streaming, PlayStation Now, Sony has also revealed plans to add PlayStation 1 and PlayStation 2 games to its catalogue in the future.

PlayStation Now director of marketing Peter Jamshidi said there were some "amazing" games from Sony's earlier consoles that will be added in the long term, but that the service's current focus is on PS3 titles for the time being.

The subscription costs are $20 for one month or $45 per quarter.