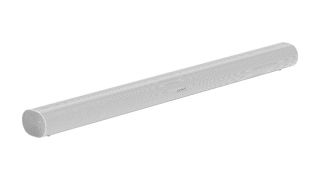 Is this the new Sonos Dolby Atmos soundbar? Images leaked by Zatz Not Funny! supposedly offer a first look at the rumoured Dolby Atmos-supporting Sonos Playbar, which is expected to launch tomorrow.

Last week, rumours circulated that Sonos would reveal three new products: an all-new Playbar with Dolby Atmos, an update to its Play:5 speaker, and a subwoofer. The multi-room mogul has since tweeted a teaser (below) for a news announcement on 6th May, suggesting that the trio of new products could be made official tomorrow.

Zatz Not Funny! has published images of what it believes to be the new Sonos Playbar – and they show a significantly restyled design compared to the original model, which was released back in 2013.

The most obvious observations: it will come in black and white, like its predecessor, but sport a much slimmer, longer and more cylindrical profile than the existing Playbar and, indeed, the smaller Sonos Beam.

One Reddit user, who could well be a beta tester for the new soundbar, has suggested it is 45 inches (so 114cm) in length – 10 inches (24cm) longer than the Playbar. That would make it stretch almost the width of a 55 inch TV.

The publication also surmises that the new Playbar will work in one orientation only, irrespective of table-top or wall mount positioning. The images also show touch sensitive controls along the top.

The seemingly flattened top of the soundbar could be to accommodate upward-firing speakers to effectively deliver the height channels in Dolby Atmos soundtracks, however it's impossible to be certain from these low-quality images.

Thankfully, it doesn't seem we have long to wait to find out Until tomorrow, then.