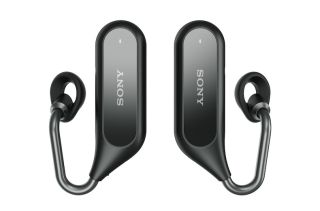 Sony has confirmed its Xperia Ear Duo wireless open-ear earbuds, first announced as a concept product two years ago, will be available to buy this Spring.

The stereo headset is made up of two completely wireless in-ear pieces, which instead of cancelling out the noise from your surroundings, lets it in for a “dual listening experience”.

The idea is that you can listen to music, take phone calls or use your phone’s built-in smart assistant while still being able to hear what’s going on around you – vital for the likes of cyclists and road runners, but also office workers too.

You can even receive audio notifications from your calendar, details of received messages and news updates to the headset.

Sony says the headset will be aware of your surroundings, meaning it can adjust its volume to suit your environment, and tailor notifications based on the time, your location and what you’re up to.

The Xperia Duo are made from aluminium and rubber, and sit underneath the ear to avoid interference with glasses.

The driver is located in the hook resting behind your ear, while the Sony-developed Spatial Acoustic Conductor transmits the sound directly into the ear canal.

The Ear Duo supports head gestures and tap controls for playback and incoming calls, meaning you’ll be able to answer a call by nodding your head or tapping on the earpiece. It also supports voice control for making calls, sending messages or setting reminders, thanks to four built-in microphones.

It lasts around four hours on one charge, with its carry case offering up to a further three charges. A fast-charge feature gives you an hour’s worth of playback in just seven minutes.

The Xperia Ear Duo will be available in the spring, in a choice of black or gold finishes, with price yet to be confirmed.