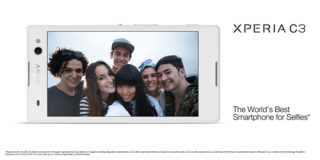 Sony Mobile has unveiled the new Xperia C3 smartphone, touted as being the "world's best smartphone for selfies".

The bold claim is largely down to a 5-megapixel, wide angle, front-facing camera with LED flash.

The camera also features software enhancements such as retouching and auto-scene modes. There's also a quick sharing option to social sites such as Instagram.

Elsewhere there's a 5.5-inch, 720p display, a 1.2GHz Qualcomm processor, 1GB of RAM, 8GB of onboard storage with support for microSD cards up to 64GB, 8-megapixel rear facing camera and a 2500mAh battery.

Rounding off the features are dual-sim card support, Bluetooth 4.0 with NFC capabilities and Android 4.4.2.

The Sony Xperia will be available in white, black and light blue finishes and will initially be available in China from August, with a UK release expected shortly after.

Little was known about the Xperia C3 until yesterday when Sony posted an image on its Xperia Twitter feed, teasing the device ahead of its launch.

Find us on Google