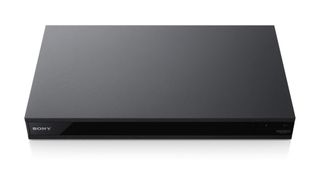 Flick through our Sony reviews on whathifi.com and you’ll see a whole page of five-star reviews for its 2018 products, including the HT-ST5000 Dolby Atmos soundbar and UBP-X700 4K Blu-ray player.

Both products have been key for Sony in keeping on the cutting-edge cusp on the fast-growing home entertainment industry, and both consequently won 2018 What Hi-Fi? Awards - so we’re pleased that the company has used CES to announce their forthcoming siblings.

The HT-X8500 is another Dolby Atmos-supporting soundbar, however it looks to be a slightly different beast from the HT-ST5000 (£1200) - largely hinted by its modest £350 price tag. (The 'SKY' range of Atmos soundbars that LG teased a few days ago could instead be the ones to take on the high-end mantle for 2019...)

Sitting at other end of the price spectrum, then, the budget HT-X8500 is a 2.1-channel soundbar that can deliver Dolby Atmos and DTS:X soundtracks through a ‘virtual’ 7.1.2-channel surround sound thanks to Sony’s ‘Vertical Surround Engine’ technology.

There are dual subwoofers onboard, seven optimised sound modes, and Bluetooth connectivity for not only wireless music playback but also a wire-free connection between the HT-X8500 and your TV.

It doesn’t sound like HDR10+ is on the X800M2’s compatibility menu, however, so the player won’t be able to play (the allegedly imminent) HDR10+ Ultra HD discs.

A 4K upscaling feature works to enhance the picture of non-4K content such as standard Blu-rays, and built into its smart platform are 4K-supporting streaming services such as Netflix, Amazon Prime Video and YouTube.